The bottle was created to hold five different scents from the Louis Vuitton Les Extraits perfume collection, which is meant to capture "liberation" and "absolute movement".

"I wanted to approach the project from a sculptural point of view, to bring something different to perfume," Gehry said.

"It's not a finished geometric form, it's just movement – visual movement with the added interest of ephemerality."

For the bottle's crinkled cap, Gehry took a sheet of aluminium and sculpted it into a twisting, blossoming flower that sits on top of the flacon.

The architect employed a similar technique for a crinkled gold bottle he made to mark the 150th anniversary of Hennessy X.O.

Gehry wanted the shape to embody the spirit of sailing, an activity that the architect is widely known to love.

"When you sail, on the ocean or elsewhere, there is a very intimate relationship between the skipper at the helm and the wind, and the visual impression it creates," Gehry explained.

"The sail moves gently, the air moves and you just try to keep steady – there's an idea of movement, but it's not the same as with a racecar."

Gehry's design for the Louis Vuitton Foundation in Paris, which is formed of twelve curving sails and 3,600 glass panels was directly used to inform the design.

The bottle is meant to represent the thirteenth sail of the building.

"Reproducing, through micro-architecture, the bulge of a boat’s sail, seafaring, hair blowing in the wind, Les Extraits Collection evokes the thirteenth sail," said the brand.

"The Les Extraits Collection bottle reproduces, without imitating, the tension of those twelve sails." 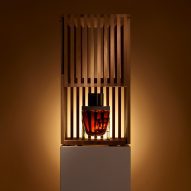 The bottle's rounded shape was informed by the original bottle for the fragrance designed by Marc Newson. Frank Gehry altered and expanded the lines.

The Louis Vuitton logo is embossed on the side of the bottle, along with the name of the perfume.

Each of the bottles in the Les Extraits collection is packaged in a cylindrical white box with a slightly sloped top.

Gehry is one of the world's most respected architects. He is the recipient of the Pritzker Architecture Prize, America's Presidential Medal of Freedom and Japan's Praemium Imperiale, among other accolades.

He has a long history of designing for Louis Vuitton. For Louis Vuitton Maison Seoul, he added a stack of sweeping glass sails on top of the white stone building.

Sailing has inspired many of Gehry's past designs. In 2015 he created a wooden sailing yacht called Foggy for his own personal use.

Photography is by Florian Joye.