Designer Richard Clarkson has created a small, remote-controlled cloud for the home that plays music and flashes while hovering a few centimetres from the ground.

The Making Weather project is a collaboration between Clarkson and Crealev – a company that specialises in creating levitating products.

Made from clumps of white polyester fibres, the cloud and its base are embedded with magnetic components that allow it to float a few centimetres off the ground.

According to the designer, the cloud has "full rotational movement" and bobs slightly up and down to create a "realistic atmospheric experience". 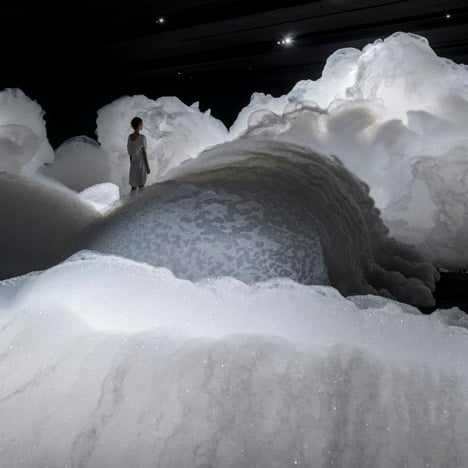 "The shape of the cloud is designed to represent a cumulus hovering on the horizon, though we also drew inspiration from more generic cloud-computing icons," Clarkson told Dezeen.

"Each cloud is hand fluffed so each one is unique – just like a cloud should be," he added.

While the base itself must remain plugged in, a rechargeable battery powers the cloud – which also features an built-in Bluetooth speaker and sound-reactive LED lights.

Although the design is currently a prototype, the designer hopes it will soon become commercially available.

Clarkson, who initially designed the cloud to hang from the ceiling, often creates conceptual versions of regular products.

Previously, the New Zealand designer created a conceptual smartphone that combines a digital touch-screen on the front with interchangeable mechanical dials on the back.