Fordlandia was constructed deep in the Amazon in the 1920s, as a source of rubber for Ford's production line. The industrialist created roads, schools and houses for his "ideal" city, along with a set of strict rules that governed inhabitants' behaviour.

However, after a series of revolts, Fordlandia was abandoned and left to be reclaimed by nature in the 1940s. Studio Swine's exhibition showcases pieces designed for an alternative, successful history of Fordlandia. 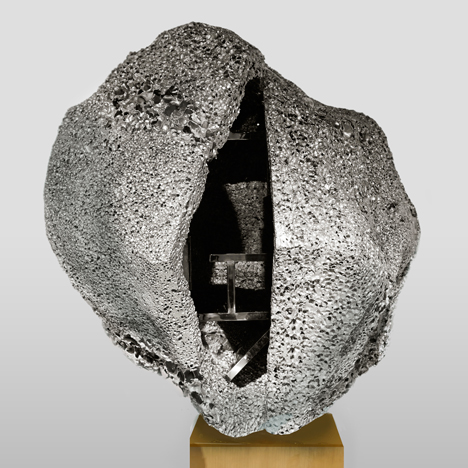 The duo used Ebonite – which is made from vulcanised rubber, sulphur and linseed oil – to create lighting and furniture. Dining chairs feature rattan seats, bent legs and squiggly backs.

Rounded lines are repeated in floor lamps – which have large, curved supports – and in lounge chairs with zigzagging arms.

The pieces are installed in a space designed to resemble a fictional Fordlandia labourer's living room. It includes denim work jackets and hangings created by London College of Fashion graduates Emma Fenton Villar and Erica Weide.

Historic photographs of the city, rubber tapping paraphernalia, and a film by director Juurian Booji that documents the studio's trips to the world's last Ebonite factories are also on display.

The collection is being shown at an exhibition, titled Fordlandia, at the London College of Fashion's Fashion Space Gallery. It opened on 22 September and runs until 10 December 2016.