US studio Clive Wilkinson Architects has completed a new Texas office for tech company GLG, which features an open-office plan and a variety of communal workspaces.

The project was designed for Gerson Lehrman Group, or GLG. Founded in 1998, the tech company offers an online learning platform and network service for professionals.

The company formerly occupied two lower floors in a tower in downtown Austin.

It commissioned LA-based Clive Wilkinson Architects – which previously designed GLG's global headquarters in New York City – to design a new, larger office for the 15th and 16th storeys of the same building.

Concrete flooring and exposed structural elements give the space an industrial character. The firm used wood to create a platform in the lobby, adding warmth to the space. Timber was also used for tables and a coffee bar. 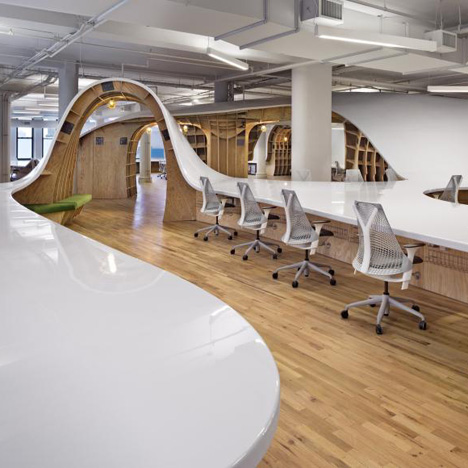 The office features locally sourced materials and LED lighting. Carpeting and acoustic ceiling tiles are made of recycled materials.

Pops of red-orange were incorporated throughout the space, from seating upholstery to the translucent walls of meeting rooms.

The design team created four distinct areas. Each houses different business groups and is fitted with the tools needed to support daily tasks.

To help prevent workplace "silos" from forming, the team created a large atrium and staircase that connects the two floors. Guardrails made of white metal mesh preserve sight lines between the two floors.

The firm incorporated a system it devised called Activity Based Working (ABW), which does away with personal cubicles and corner offices. Instead, employees can choose to work in a variety of spaces, from private meeting rooms to a staffed coffee bar.

"The ABW method of working empowers users by supporting a variety of working styles," the firm said. "By relinquishing corner offices and cubicles, the working environment gains efficiency and allow for additional communal spaces such as the barista bar and plaza."

The ABW concept is intended to facilitate collaboration and creativity, as well as provide comfort for employees. The firm also incorporated the system at GLG's office in New York.

"Employees might be giving up their personal desks, but they gain the entire office," explained Clive Wilkinson. "By 2030 pretty much everyone will be working this way, so why not go there now?"

Clive Wilkinson Architects, founded in 1991, has designed a number of offices, including Google's corporate headquarters in Silicon Valley and the serpentine Superdesk for the Barbarian Group's New York office.

Last year, the firm unveiled a conceptual scheme that involves "carpet bombing" London with a co-working office in the sky.