Miel Arquitectos has added bright pops of colour to a Barcelona apartment that is tailored towards tourists.

The 65-square-metre Piso Pereiv44 flat is divided into halves by a continuous wall, which is punctuated by fluorescent green storage spaces that are covered in a mirrored panel.

The kitchen and living spaces are arranged down a single corridor, while the apartment's two bedrooms are tucked away on either end of the flat. 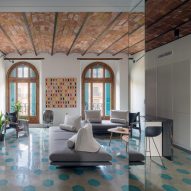 Brown patterned tiles cover the floor of the living area, which opens out onto a balcony.

"This flat was reformed with the idea of using it as a tourist apartment for short but vibrant stays," said Barcelona-based Miel Arquitectos, which previously designed an apartment with micro live-work spaces.

Both of the apartment's bedrooms offer a more stripped back atmosphere, with white painted interiors, hybrid wardrobe-desks made from the flat's original doors, and headboards that follow the path of the original walls.

The kitchen is described by the architects as "more like a raised DJ booth than Grandma's cosy cooking corner".

Extra natural light is brought into this space by the apartment's mirrored partition, which also emphasises the pattern of the scalloped ceiling.

"The kitchen is centre of this apartment, wrapped with a bar which provides an inviting place to chat and have something to eat," added the designers.

"The large mirrored wall offers many opportunities for playing with multiple reflections."

Photography is by Asier Rua.