A wooden ladder leads up to a set of white cabinets filled with animal bones, plants and a preserved tarantula in this science laboratory designed by Charles Tashima Architecture for a London primary school.

The London-based studio overhauled an underused cloakroom to create a series of workspaces for Yerbury Primary School, which occupies a 19th-century schoolhouse in the north of the capital city.

The room named Q, which stands for questioning, is designed to encourage students to experiment and discuss science, as well as to reference the history of the Victorian building.

The team first stripped back the interiors, leaving two cast-iron radiators, and removed a dividing wall to open up the space. They then fitted a Cabinet of Curiosity, backed by white wire-reinforced safety glass, high up on one black wall.

It exhibits a changing display of curious items like animal bones and plants, and is accessed by a wooden ladder that clips onto and slides along onto a metal rail in front of the shelves.

"The intention of the room was to use the space as a place for questioning," said the architect. "We introduced the cabinet, which refers back historically to the prevalent use of cabinets of curiosity."

"Its use is intended in the same way as such cabinets would have been used – a display of curious things to discuss and study," he continued.

To make the most of the room's high ceilings, a mezzanine level was also added. It offers views down to the lab below, where white counters wrap the walls and a sink is located beneath a large window.

A cast-iron spiral staircase, re-purposed from a historic building in London's Portland Place, leads up to the mezzanine.

The staircase is accompanied by a series of other industrial-style finishes, including the black steel handrail on the upper level and a series of pendant lights that hang down from the ceiling on long flexes.

A further set of cabinets located beneath the staircase create a separate workroom with a large Q marked out on its dark glossy floor. 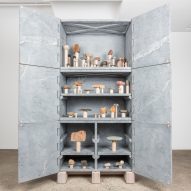 Chamber enlists nine designers for Of Cabinets and Curiosities exhibition

Other projects playing on the idea of cabinets of curiosities include an exhibition of shelving and storage units in New York and a wooden cabinet by Chinese studio Neri&Hu used to display objects representing the seven deadly sins.

Photography is by Oliver Perrott unless otherwise stated.