New York gallery Chamber is showcasing shelving and storage units by designers including Studio Job, Nendo and Gaetano Pesce for an exhibition to celebrate its second birthday (+ slideshow).

Of Cabinets and Curiosities features work from nine designers that frequently work with Chamber, which was founded by Juan Garcia Mosqueda in 2014.

"We could think of no better way to celebrate two years of Chamber than asking some of our favourite designers, many of whom have contributed to Chamber already, to present designs that capture the gallery's personality so well," he said.

"Chamber is, after all, a modern-day cabinet of curiosities."

Each of the designers has contributed a cabinet and an accompanying curio for the exhibition, which opened this week.

New York duo Fort Standard have housed their own collection of rocks within a soapstone cabinet that debuted at the Collective Design Fair in May.

A 2015 work by Gaetano Pesce called Mobile Verde is on show for the first time, along with a miniature version from 1987 that influenced its design.

MOS Architects – which designed Chamber's interior – is presenting the first piece in a new series called Model Furniture, influenced by the imperfect representations of furniture found in architectural renderings.

Kwangho Lee is showcasing his modular bookshelves titled The Moment of Eclipse, commissioned by Chamber in 2015, along with a collection of his son's toys. 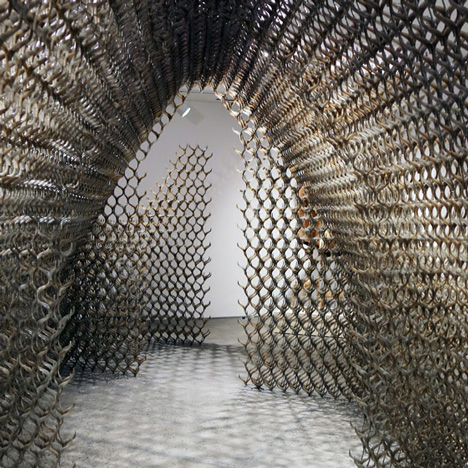 A unit called Rhino Tower Shelf by Chen Chen and Kai Williams is paired with their Swell Vase.

Four cabinets from past Chamber Collections are also on view, integrating the curation of the previous two years into the current exhibition.

From the first collection is Dirk Vander Kooij's Diffuser Cabinet, shown alongside drops from his 3D printing robot, and Nendo's glass Deep-Sea Bookcase that is displaying the Japanese studio's bowls made from recycled Coca-Cola bottles.

The Walnut Frank cabinet by Snickeriet and Karl-Johan Hjerling is from Chamber Collection 2. It is showcasing a set of wooden boxes designed by the studio for this exhibition.

Of Cabinets and Curiosities will be on show until 15 October 2016 at Chamber, located underneath the popular High Line park in Manhattan's Chelsea neighbourhood.

The gallery's previous exhibitions have included a show that explored man's progress through designed objects, a display that aimed to make visitors "radically reconsider the power of flowers", and a series of cube-themed objects and sculptures.