Eindhoven-based designer WooJai Lee has turned recycled paper into bricks that can be used to build furniture.

Displayed at this year's Dutch Design Week, PaperBricks are made from newspaper pulp that has been mixed with glue and pressed into a mould.

The paper lends the bricks a textured and marbled exterior and, according to the designer, gives them a "soft, textile-like surface".

Each brick can be cut, drilled and glued in much the same way as wood. Holes down the side of each block allow them to be joined together.

"The form of the bricks was chosen to minimise the material usage, minimise the deformation and maximise strength," said Lee, who graduated from Design Academy Eindhoven this year and now has a studio in the city.

Usually, paper becomes weaker after each round of recycling as the fibres shrink and decrease, which is what prompted Lee to consider a more sturdy solution.

"I wanted to give paper rubbish a new life as a much stronger and longer lasting material," he added.

To show the possibilities of the bricks, Lee has also designed a set of ready-assembled benches and tables built using them. Horizontally placed blocks form tabletops, while bricks placed on their ends provide support.

"I want people to really touch and feel the softness and warm tactility of the bricks," said Lee. 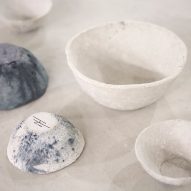 The designer is also exploring the possibilities of developing PaperBricks for further use as wall panels or room dividers.

Objects made from unusual materials were widespread at Dutch Design Week. Another highlight was designer Nienke Hoogvliet's Waterschatten homeware and furniture, made from used toilet paper.