Photo essay: photographer Anton Rodriguez has documented the interiors of 22 homes at the iconic Barbican Estate in London.

In his new book, titled Residents: Inside the Iconic Barbican Estate, London-based Rodriguez aims to highlight the stylish living spaces created by many residents of the brutalist complex, which is home to over 4,000 people.

The photographs capture an assortment of impressive spaces, from a vibrantly chaotic flat filled with artworks, books and plants, to a carefully styled home with an extensive collection of mid-century furnishings and ornate objects.

In this essay – an edited version of the book's foreword – design writer Katie Treggiden explains why there is so much interest in going behind the scenes at the estate.

A sense of privacy and protection is built into the Barbican estate's architecture. Designed to shield its residents from the outside world – whether that was the aftermath of the Blitz, the surrounding industry of the city, or the traffic below – this holistic experiment in urban housing is both of the city and apart from it; a place whose unmistakable "otherness" inspires both devotion and distaste, and somewhere that has a captivating power to spark curiosity and speculation among those looking in from the outside.

The original brief had been to establish the viability of "providing living accommodation for a large number of people, who could be expected to pay an economic rent".

Inspired by Dolphin Square – a housing estate for 3,000 built in Pimlico in the 1930s – architects Peter "Joe" Chamberlin, Geoffry Powell and Christoph Bon established the core design principles for all of their subsequent plans. The Barbican estate would cocoon its residents from the surrounding city, and – as well as providing homes "with characteristics which are outstanding or unique", that "reflect the prestige of the City" – it would offer communal and cultural facilities such as car parking, a cinema, a concert hall and theatre, an exhibition hall, gardens and courtyards.

Far from being stubbornly Brutalist or Modernist, the design for the estate was informed by familiar forms and a connection to the site's history. Elements that survive from the architects' early (largely medieval-inspired) plans include "arrow slits" in the perimeter wall and the moat-like lake with drawbridges surrounding St Giles-without-Cripplegate Church, whose crenellated roofline is mimicked in the towers and terraces.

Georgian and Victorian ruins were left in place where they fell on the line of the old London Wall, and the estate's formal rectilinear layout reflected Georgian squares such as Bloomsbury. Walkways were positioned in line with, and named after, roads that were obliterated by the bombing, providing a sense of continuity.

But, torn between the tradition in which they were educated, and the new modernist ideals that were emerging in Europe throughout the project's development, the architects increasingly wanted to create a utopian vision of the future. They did this by combining those local and historical references with ideas for modern living that responded to the aspirations of the post-war generation and suggested a distinctly European sense of "newness".

Chamberlin took the Barbican Committee to see the best examples of contemporary architecture in Europe – including Berlin's Hansa district, Le Corbusier's Unité d'habitation and the Theatro San Erasmo in Milan – so keen was he to secure their support. And it worked: Le Corbusier's principles can be seen right across the built estate from the commitment to space and light in even the smallest flats, which feature dramatic double-height spaces and floor-to-ceiling glazing, to the flexibility of sliding walls between rooms.

Admittedly, its execution is more faithful in some areas than others – although Milton Court (since demolished) clearly had its origins in the Villa Savoye, the terraces stand on a solid podium despite also being supported by Le Corbusien "pilotis" (stilts), and the pick-hammered concrete finish unifying the site goes against the constructional honesty of "béton brut" from which Brutalism derives its name. Concrete was in fact an economic compromise suggested by structural engineer Ove Arup, replacing CB&P's original white marble cladding.

Eventually 2,014 apartments in 140 types, ranging from studio flats to seven-bedroomed houses, were completed across three tower blocks, 13 terrace blocks, two mews and The Postern, Wallside and Milton Court. A series of raised walkways (originally planned as part of a network of 30 miles of "pedways" across the city that was subsequently abandoned) separates residents from the traffic below.

The arts centre that followed was built in such a way as to minimise disruption to the site's inhabitants, buried in a 60-foot hole with its fly-tower draped in a pyramidal greenhouse revived from previous plans. Even St Giles' church bell no longer rings, lest it disturb the residents.

Inside, space is both efficiently optimised – with sliding doors, mezzanine levels and compact kitchens designed by boat-builders – and yet gloriously "wasted" with double-height spaces, barrel-vaulted bedrooms and functionless alcoves, which, as the architects put it, were "only included for delight". Every detail has been considered, from handles that fold into doors, enabling them to sit flush to the wall, to double-access cupboards that allow deliveries to be made without disturbing residents. 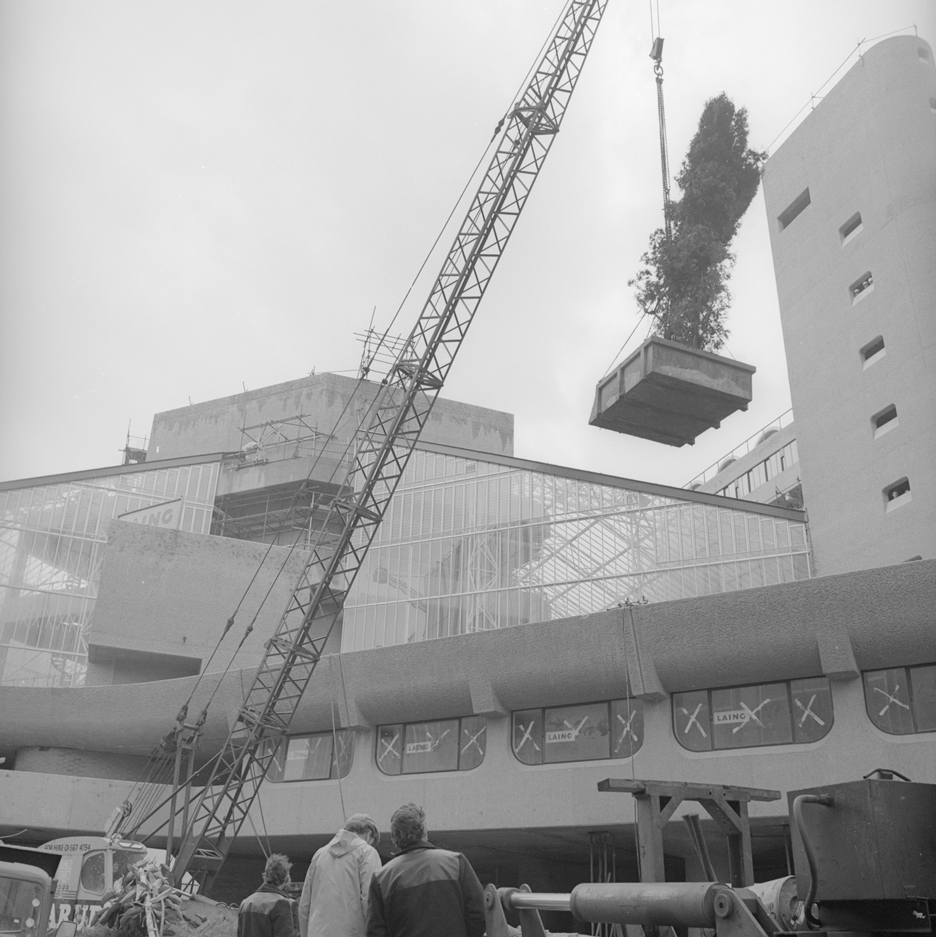 Perhaps inevitably, the kitchens have dated the most. Yet to acquire the status they have gained in recent times, they were treated as functional service areas and designed for efficiency. The bathrooms have fared slightly better – although some argue that's only because the sheer weight of the bath makes it difficult to replace. The cleverly designed washbasin is testament to Chamberlin, Powell and Bon's fastidiousness; it was a late addition following new guidance recommending that separate toilets should have their own sinks, and although the trio found the perfect solution in Twyford's design for the Shell Centre, they insisted on developing their own version, which took six months to produce.

Despite the current revival of Brutalism, the Barbican estate fiercely divides opinion to this day. It was granted Grade-II-listed status in 2001 and in 2003 topped a poll of London's ugliest buildings. In 2014 it was both described by influential architecture blog Dezeen as "a utopian ideal for inner-city living" and voted London's ugliest tall building – again. People either love the Barbican or they hate it.

Personally, I love it. In his book, B is for Bauhaus (2014), Deyan Sudjic says, "architecture at its heart has to be about optimism", and for me that is what makes the Barbican such a special place.

Despite being completed long after the Modernist movement had reached its zenith and suffering at the hands of many compromises, it is an icon of altruistic architecture. Its creation was driven not by a desire for fame and fortune (in fact Powell destroyed most of the firm's records), but by an aspiration to bring a better way of life to British people. Even the smallest flats are spacious and light – and complemented by culturally vibrant communal spaces, such as the arts centre, lending library and waterside café. Its success is less about what it's like to look at and more about what it's like to live in. As Tom Dixon says in Barbican: Life, History, Architecture (2014): "the Barbican reminds us of how different it all could have been".

Today, the Barbican estate is home to approximately 4,000 people (half the population of the City of London), but such is the privacy of the estate that speculation abounds about what goes on behind its closed doors. What do the flats look like inside? Do listings regulations really protect the bathplugs? Who lives there – have the original residents stayed into their dotage, or is the estate once again full of the young professionals for whom it was originally designed? Are the interiors slavishly Modernist, or have people stamped their own personalities on them, as CB&P hoped they would?

For such an iconic complex that looms so large on London's skyline, relatively little is known about life inside. Countless books and magazine articles have been written about its history and architecture, but very little has been published about the people who actually get to experience it first hand. In this wonderful book, and in his on-going photography project of the same name, Anton Rodriguez is giving us a rare glimpse inside the Barbican estate and introducing us to some of its residents.