Karawitz designed the 23 Housing Unit, complete with a restaurant and brewery, for a triangular site at the intersection between the Marne quay and the bridge that crosses the Ourcq canal.

It has two levels of access: one from the green pedestrian bridge that crosses the canal and the other from the lower road level that joins the quayside.

The architects wanted to make the most of views to the water, as well as the fact that the building has no adjoining neighbours – an unusual feature for the area.

The development, which is made up of two eight-storey blocks, is placed to the quay side of the plot.

This facade features a series of balconies overlooking the canal and is clad is dark wood panels. The other side, which overlooks the outdoor area, has a light grey facade lined with long balconies.

"Amplifying its singularity, this plot is served by an upper level of Rue de l'Ourcq, at the opening of a pedestrian bridge over the canal, while it leans down to street level of Rue de Meurthe," said the architects.

"It offers the rare opportunity to Paris, to develop an autonomous building without adjoining or neighbouring properties, and generate both a garden to the south and exceptional views to the north."

One- and two-bedroom apartments overlook either the canal or the garden, while attic flats face both ways.

Between the pair of volumes is an external central concrete staircase, from which the water can also be glimpsed.

A metal mesh handrail wraps the stair, which leads to each of the apartment landings. Here, glass doors open to the entrance halls.

Inside, the apartments feature either wood or aluminium window frames that contrast with the buildings darker exteriors. Walls are painted white, while floors are covered in oak boards.

Karawitz designed the 23 Housing Unit for property developer Ogif. Its plot was previously assigned to a co-housing development as part of the local masterplan, but the project fell through for not making the most of the space and offering more residences.

Other recently completed housing blocks in the French capital include apartments by Odile Guzy Architectes featuring white latticework and flats by Antonini Darmen with arch-fronted balconies.

Photography is by Schnepp + Renou. 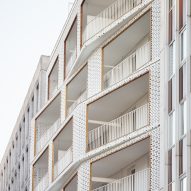