Studio Ben Allen was brought on to make the apartment's layout more flexible and better suited to modern living.

The owners of the property, which is housed within a 19th-century regency villa, requested that the traditional arrangement of rooms was maintained – meaning that the studio had to come up with a less intrusive way of updating the interior.

They began by looking to the geometric-patterned screens often found in traditional Indian architecture.

"[We were] interested in exploring different degrees of separation whilst maintaining visual connections afforded by a series of perforated screens," said the studio.

The four custom-made screens are placed on each side of the square-shaped hall. They open up in two directions, allowing the space to be transformed into various arrangements.

When closed off, a level of privacy is retained with just light shining through the gaps. But when opened, the screens sit flush with the walls and appear as decorative panelling.

"The patterns were mapped out as one continuous unfolded elevation by creating a greyscale image. The darker the area of the image, the more closed the corresponding pattern would be."

As they were on a tight budget, the studio picked utilitarian plumbing fixtures for the fully tiled kitchen and bathroom.

To make a little apartment in the city feel more spacious, Alexander Fehre moved the dining table into the kitchen, while MWAI used minimal materials to make a property feel as light as possible. 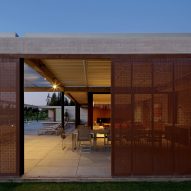