This movie by videographer Alejandro Villanueva tours the Reiulf Ramstad-designed Trollstigen Visitor Centre in rural Norway, revealing how its network of pathways zigzag across a landscape of rugged mountains and deep fjords.

Completed by Oslo-based Reiulf Ramstad Arkitekter in 2012, the tourist facility features a footpath that crosses the mountain river and leads to lookout points made of concrete, steel and glass.

There is also an angular concrete mountain lodge at the entrance to the site, containing a restaurant and a gallery that overlooks cascading pools of water.

Villanueva's aim was to show the experience of the site at different times of day and to reveal its dramatically changing conditions – although his first two visits to the project proved unsuccessful due to foggy weather.

It was not until his third time making the seven-hour journey to the site that he was able to shoot, although he still struggled with severe wind.

"The biggest challenge of the shoot was, as you can imagine the weather," he told Dezeen. "Trollstigen is very high up, making it very, very unpredictable. Needless to say, living as far as I am from the location did not help."

"Weatherwise, it was windy, very windy and cold, very cold," he continued. "I had to secure the tripod to the ground with a cable otherwise the wind would blow it off as it once did."

The surrounding nature in the valley played a key part of Villanueva's film. He used the timelapse technique to set the pathway against a backdrop of rippling water, swaying grasses, as well as the movement of fog and clouds.

As the sun set, he used a wide-angled shot to showcase the light of a vehicle moving up the mountain, while an image of the visitor centre captured the reflection of light in the water in front.

This is the second instalment in the videographer's Iconic Norway series, which will showcase the country's contemporary architecture. The first explored the undulating wooden form of the Snøhetta-designed Reindeer Observation Pavilion in the Dovre Mountains.

"I chose Trollstigen as my second project because of the uniqueness of the place and the sheer beauty of the building," Villanueva said.

"I think Ramstad did an incredible job conceiving an space that is both functional and bold, an exquisite representation of contemporary Norwegian architecture."

The Trollstigen Visitor Centre is one of five architectural projects along the Geiranger-Trollstigen tourist route, a 66-mile scenic road across the Trollstigen Mountain Plateau in western Norway. 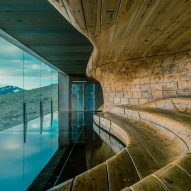 Trollstigen – or "troll's ladder" – is regarded as one of Norway's most spectacularly beautiful areas and the tourist route across it is one of the country's most popular attractions. Reiulf Ramstad Arkitekter also completed a jagged glass restaurant at the foot of the wall.