A nose-shaped fountain spouts water from the facade of this museum by South Korean architect Moon Hoon, which is dedicated to the fictional character Pinocchio.

Huge Pinocchio dolls litter the grounds and interiors of the Pino Familia museum. It was designed for an avid collector of ephemera relating to the children's book character – whose nose grows in correspondence with his dishonesty.

Moon Hoon arranged the museum across three metal-clad buildings that surround a grassy courtyard containing a pond and a miniature train set on elevated tracks. One particularly large doll towers above the museum's roofline.

The first building is used to display the collector's Pinocchio dolls, the second is dedicated to other characters from the tale, and the third hosts a shop, cafe and events auditorium.

Each of the buildings has been gifted an usual name relating to the tale of Pinocchio: Wave and Whale, Whale Tale and The Nose Fountain respectively.

"The first building attempts to express a space and form which is somewhat inspired from the Pinocchio story where a large storm and whale appears," explained Moon Hoon.

"The plan is curvilinear, reminiscent of a fetus crouching in the womb," added the architect. "The plan grows out to become a mix of whale and wave, mixing and becoming one entity."

"A very narrow crawl space between large and small stepped seats attempts a space of playfulness and adventure."

The building named Whale Tale houses a collection of character dolls in a tail-like volume, while a bulge intended to represent a whale's head hosts an auditorium for concerts and movies.

"The second building is a figurative building, standing and holding strong like a large whale," said the architect.

Two ear-like platforms project from the curving sides of the final building, the Nose Fountain. A stainless-steel pipe affixed to its side represents Pinocchio's famous nose, and spouts water into the courtyard below.

A second-floor balcony provides views into an adjacent forest and down into the courtyard from the cafe.

Other projects by Moon Hoon include a holiday home on Jeju Island with a copper observation pod modelled on the head of a windswept woman and a pair of buildings in Seoul featuring moon-shaped indentations. 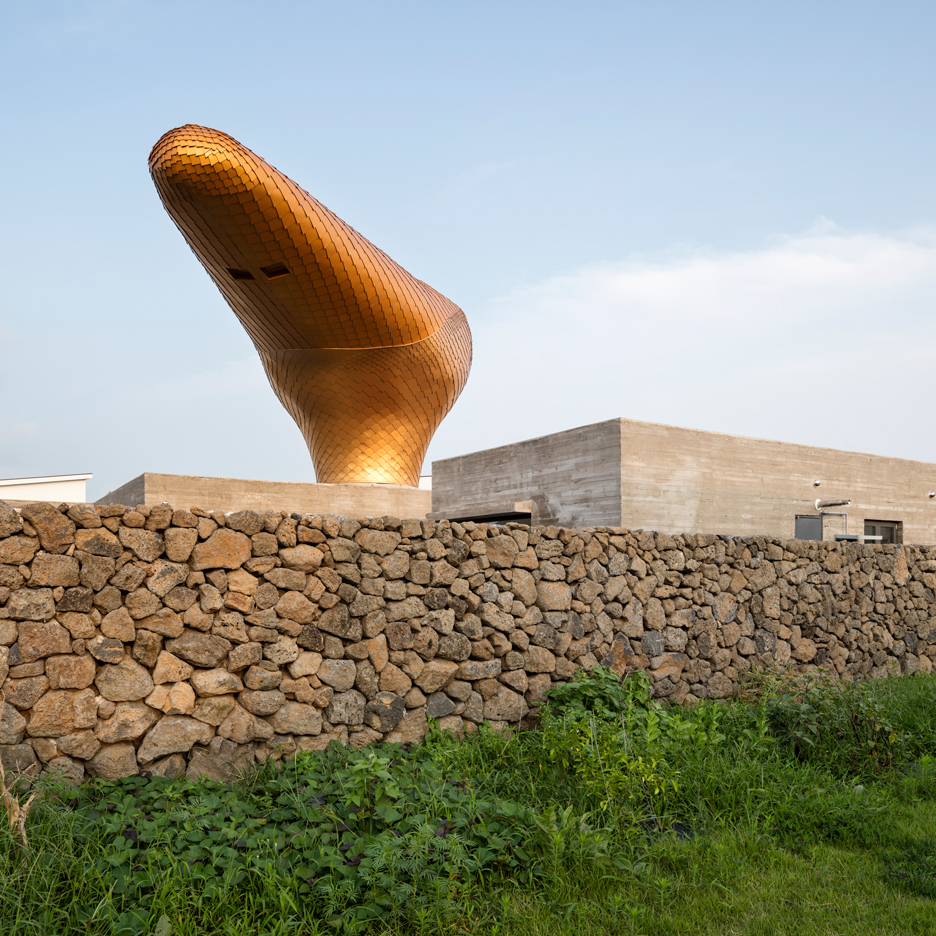