What can architecture possibly do to confront the terrifying enormity of death? The pseudo-Christian customs that constitute most funereal rituals in the West feel stale and emaciated. Off-the-shelf ceremonies are peddled by an industry at best unable to console, and at worst exploitative of, the bereaved. When my NikeID trainers are more customised than my funeral will be, you know something is rotten in how we die and mourn. As an ageing population now promises a booming death rate, it is becoming increasingly clear that death urgently needs a redesign.

The total vitality and expressiveness of a human life is extraordinary. The tapestry of relationships, values and adventures we each experience in our time on earth is vast. Stand watching a large crowd swell and jostle and it can be overwhelming – all those lives, each representing a complex web of choices.

"Choice" is the watchword of our political era. We are told that as consumer-citizens we crave choice above all things. Choice in the food we eat, the culture we imbibe and the clothes we wear. Choice in the exact shade of off-white with which we decorate our living rooms and the texture of loo roll we purchase. Having choice has become the all-encompassing aspiration of our time.

How odd then that when it comes to death, the final expression of our agency as actors in the world, our choices are so constrained.

Most funereal rituals in the West feel stale and emaciated

Ever tried to design a funeral? If you have you'll be familiar with the limited menu of prescribed services available (each with its price tag). Burial or cremation? With or without minister? For most of us, the extent of design choices available in bidding our final goodbyes boils down to selecting the variety of flowers, picking a reasonably resonant reading and, if the venue and budget permits, playing a piece of favourite music.

Some argue that, amid the paralysing misery of bereavement, a familiar funeral template is a useful tool. After all who wants to take on the stress of orchestrating a highly designed funeral when they've just lost their partner, parent or child? But this is the wrong question. The right question is why we have so little say in our own deaths.

The cost of a funeral even before customisation can be a significant burden. The average cost of a funeral in the USA is now $7,300. In the UK, the Coop's budget £1,995 "simple service" proudly declares: "If death occurs out of normal working hours, at home or in a care home, we'll remove your loved one into our care, out of hours, at no extra cost." How considerate!

Where customisation does exist, the options available for a bespoke funeral are expensive and tacky. Guernsey-based Creative Coffins will print glossy images on your casket depicting artwork and messages to "suit your loved one's personality". Their website boasts an impressive array of suggestions including a box of cinema popcorn, a super-size packet of golf balls and a giant bottle of whiskey.

Julie Rugg, writing in the Architectural Review's recent Death issue, celebrates this culture. She enthuses: "Coffins are available with every possible style of decoration, from football strips to favoured tattoo designs, made from materials including wicker and wool."

When it comes to death, the final expression of our agency as actors in the world, our choices are so constrained

Yet all these personalised funereal flourishes are really a thin veil over a thoroughly generic process of industrial body disposal and contribute no meaningful depth to the ritual. They are the grief industry's equivalent of the choice between cappuccino, latte or flat white – it's all just coffee with milk in.

So where can design make a difference? Of course architects of the past have created some exquisite funereal spaces from Aldo Rossi's San Cataldo Cemetery to Gunnar Asplund and Sigurd Lewerentz's Skogskyrkogården. But the critical challenge now facing contemporary practice extends beyond achieving spaces of a numinous architectural quality to asking burning questions of the way we die and grieve.

James Binning, of Assemble, is currently working on a project reimagining grieving rituals for a parkland site in Bedford. He argues, "Currently we have no idea of what or who most funerary services are for – the dead person? The living? The living to do right by the dead? Or the living to begin to deal with the loss of the dead person? These are not the same thing. I believe there is tremendous potential for design to conceive more collective theatrical and profound rituals that address the paucity of ideas that exist in other ceremonies." 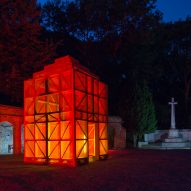 Some designers have begun their own interrogation of grief. David Best, the American artist known for his gigantic timber temples incinerated at Burning Man festival, has dedicated much of his work to the most challenging forms of bereavement.

Best's first temple in 2000 took on new meaning after a young collaborator, Michael Hefflin, died suddenly in a car crash during its construction. The subsequent Temple of Tears in 2001 was overtly dedicated to victims of suicide. At each festival, Best invites participants to inscribe the temples' astoundingly detailed interiors with messages to lost friends and leave poignant artefacts within their walls. The completion of the structure is thereby laden with emotional significance, its finished form an outpouring grief made physical. When the temporary buildings are ritually engulfed in fire, the shared moment of catharsis is intense and unique.

Designers must wrest back some agency from the doctors, to redesign not just crematoria and mausolea but death itself

Around three million people will die in the UK and USA next year (57 million worldwide). The need for the transformative power of architecture and design to challenge end-of-life conventions cannot be understated. Why, for example, does funeral planning almost always takes place after a death has occurred? Why, when as many of 74 per cent of people want to die at home, do only 18 per cent of people get to? Why too do churches remain so popular for funerals despite Christianity's dwindling relevant to both the bereaved and deceased?

While the medicalisation of death has extended life expectancy and improved care of the body, a gaping void remains in care of the soul. Designers must wrest back some agency from the doctors, eschewing traditional disciplinary boundaries to redesign not just crematoria and mausolea but death itself.