Studio Octopi has overhauled a terraced house in north London, adding an extension that features a three-storey-high window and a two-storey-high pivoting door.

Prior to Studio Octopi's intervention, the Victorian property had been subjected to an extensive overhaul in the 1980s that had failed to resolve the lack of internal cohesion and cramped feel of the living spaces.

The architects – whose previous London projects include a plywood-lined loft extension and a full-width brick and glass addition to a 19th-century house – were tasked with renovating and extending the home to create more generous spaces.

The main alterations included the introduction of a 10-metre-high glass infill extension between the neighbouring property and a reconfigured closet wing.

The extension accommodates a double-height dining space at basement level, with a master suite on the first floor. A void extending up from the dining area is overlooked by a lounge area lined with a glass balustrade on the ground floor.

"The kitchen and dining area was given over to one floor as the perfect family space but also entertaining area," said Studio Octopi director, James Lowe. "The connection with the perfectly formed patio garden gives this space a broad use and flexibility."

The glass surface, which extends the full height of the new addition, incorporates a pair of minimally framed sash windows that enhance the connection with the outdoor spaces. At the basement level, the window can be lifted to create an opening that leads straight out onto the patio.

According to Lowe, the precise tolerances that had to be achieved so the windows and door would function properly demanded close collaboration with the structural engineer and manufacturer during the design process.

Concrete flooring continues from inside to outside to create a seamless transition between the living spaces and garden, which are also connected by the 6.3-metre-high pivoting glass door.

"The challenge was to tie all the levels together," Lowe added, "which was achieved by the vertical glazing system and the large pivot door and windows in the closet wing, balancing the openings in the rear elevation."

A green wall flanking the patio space on two sides provides the house with a garden without reducing the outdoor entertaining area.

The closet wing was extended in brick to match the neighbouring buildings. Its increased dimensions enabled the ceiling heights on the upper levels to be raised, improving what were previously cramped rooms.

A staircase ascends along one side of the house, featuring open wooden treads to maintain the flow of light and sense of openness.

A complex fire strategy for the entire house was developed to satisfy regulations that would have typically called for the stairs to be enclosed.

On the top floor, the architects introduced a skylit, snug living area with a kitchenette so the family's older children have a space of their own to escape to. 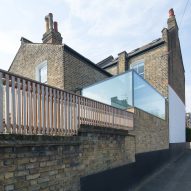