Foster + Partners and Rubio Arquitectura have won a competition to overhaul Spain's most important art museum, the Museo del Prado in Madrid.

London-based Foster + Partners and Madrid studio Rubio Arquitectura will collaborate on the project, which will involve replacing the roofs of the 17th century Hall of Realms.

They will also reorganise the floors within to create new galleries, allowing the museum to display more of its art collections.

Solar cells will be integrated into the new roof, which will cantilever out to shade the building's southern facade.

"The Hall of Realms, built by Crescenzi and Carbonel in the 1630s, is one of the very few remains of the former palace and predates the Museum which was conceived in 1819," explained Norman Foster, who describes the Museo del Prado as "one of the truly great museums of the world".

"Two centuries later the transformation and expansion of this historic hall will add significant new galleries and related public spaces to the Prado," he continued. "It will also create, as a setting, a new urban focus for the city of Madrid." 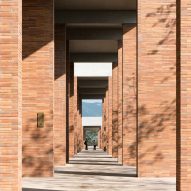 This wall will be "delicately" opened to allow natural light to enter the structure, and frame views out of it from a new plaza at ground level.

These openings also strive to make the building more permeable, allowing visitors to walk through the base of the building and access cafe seating on the northern side.

The addition to the Museo del Prado's Campus is expected to complete by 2019, in time for the museum's 200th anniversary.