California studio Bureau Spectacular has created a wooden structure on stilts that references the Primitive Hut proposed by philosopher Marc-Antoine Laugier in the 18th century.

Constructed entirely of wood, the installation consists of a box-shaped volume that sits atop tall stilts. A tiny staircase leads to the second level and the rooftop.

Inside, the dwelling is fitted with cowhide and sheepskin rugs, pot plants, and basic chairs made of metal and plastic. The space also features lifestyle accoutrements such as headphones and a bathrobe.

The structure was inspired by The Primitive Hut concept proposed by Marc-Antoine Laugier, the French philosopher and author of Essay on Architecture, first published in 1753.

Arguably the first modern architectural philosopher, Laugier believed that architecture should to return to its origins and embody basic, natural qualities – an idea that stood in stark contrast to the ornamental Baroque style of the time.

Lai's installation asks viewers to consider the role of the simple, rustic hut in the contemporary age.

"What does Laugier's old idea that architecture should be derived from nature even mean, when nature now consists of the materials and detritus of consumerism, rather than the perpendicular trunks of trees?" he asks.

The architect was inspired to create the structure following a visit to the OMA-designed Seattle Central Library, completed in 2004, which he describes as a "floating stack of stories" that accommodate humans in the 21st century.

It is set to feature in an upcoming episode of Seattle travel series Been There, Made That.

The installation also draws references to historical buildings that represent Laugier's Primitive Hut concept, but are constructed of materials other than trees.

These include the Parthenon in Greece, whose pediments depict the story of ancient gods, and Le Corbusier's Villa Savoye in France, described as a "transparent ribbon window atop orientation-less pilotis, allowing an observer to see the story of the people inside".

"It is a project that asks us to consider what it means to be a human at this stage in history, and how we imagine the next chapters ahead," added Lai.

Bureau Spectacular was founded in 2008 by Lai, who formerly worked for OMA and New York-based MOS. Lai also lived and worked in a desert shelter at Frank Lloyd Wright's Taliesin West campus in Arizona, and he resided in a shipping container at Atelier Van Lieshout in Rotterdam.

Recent projects by his studio include an LA boutique that features white display stands that fit together like a puzzle and form steps for events and performances. 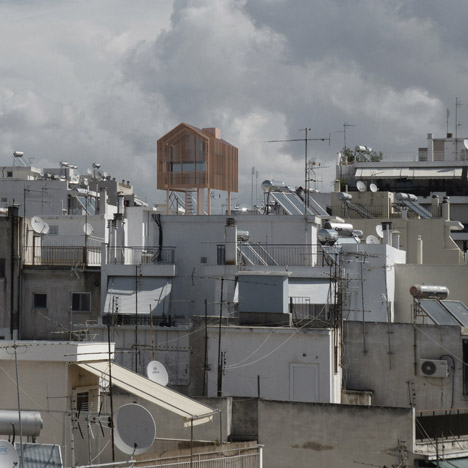