Dezeen has teamed up with online network Holidayarchitecture to give away five copies of a book featuring architect-designed holiday properties, including a series of glass and timber cabins and a symmetrical concrete house.

Congratulations to the winners! Alessio Granata from Italy, Bjarki Gunnar Halldorsson from Iceland, Madeleine Grais from Canada, Paulo Martins from Portugal and Shaunee Tan from the UK.

Holiday cabins by Norwegian architect Snorre Stinessen that overhang the coastline of Norway's Manshausen Island are included, as well as a concrete "dream house" in the Spanish canton of Matarraña by Chilean studio Pezo Von Ellrichshausen.

PAr's Portuguese hotel with a row of staircases leading up onto its roof also features, as well as a blackened-timber-clad holiday home in rural Germany designed by Möhring Architekten to look like a traditional barn.

Alongside the project stories, the publication includes essays by philosophers and critics William Menking, Cornelia Haff, Jochen Paul and Ansgar Steinhausen, who each discuss the notion of holiday architecture.

There is also a map that locates all of the properties.

The residences are all selected from Holidayarchitecture – also known as Urlaubsarchitektur. The website helps users to advertise their architect-designed properties for short-term holiday rentals, and lets others book unusual places to stay. 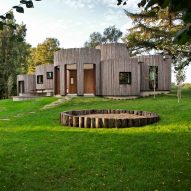 It launched in 2007 when founder Jan Hamer decided to publicise a recommendations list that would allow people to enjoy homes with interesting features while on vacation.

Five winners will each receive a copy of Holidayarchitecture 2017, which is also available to purchase online for €34.95  (approximately £29.90).