These glass and timber holiday cabins by Norwegian architect Snorre Stinessen overhang the coastline of Norway's Manshausen Island, providing a base for Arctic Circle explorers (+ slideshow).

The four cabins sit on the edge of the 22-hectare island, which is part of the Steigen archipelago in northern Norway. The island once had a thriving fishing industry, but outdoor pursuits have since become the region's main attraction.

Three of the four cabins cantilever over the stone quays that formed moorings for fishing boats, while the fourth is set at an angle to the coastline on a rocky shelf. The huts feature one glazed end that projects out towards the sea, while timber-clad ends faces toward land.

"The island's position between dramatic mountains and the Barents Sea is in itself the inspiration for celebrated Polar Explorer Børge Ousland's newest adventure; an adventure and exploration resort," explained Stinessen. 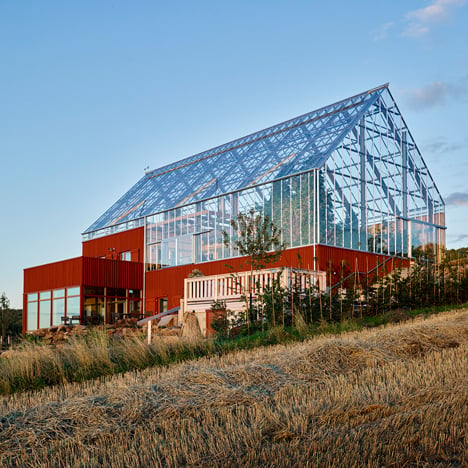 "The area is home to the world's largest population of sea eagles and the fishing is spectacular," he added. "To the north the horizon is dominated by the mountain range of Lofoten."

Each cabin has two double bedrooms and a sleeping alcove for children, and can accommodate up to five people. Pale wooden furnishings throughout mirror the colouring of the cladding, while kitchens and bathrooms have white Corian fittings.

"The main bed is positioned in the main room, slightly withdrawn from the floor to ceiling glasses, to enable the visitor an around the clock experience of the outside elements, while still being comfortably sheltered," said the architect.

"The positioning and orientation of all the cabins is based on the consideration of their individual panoramic views and privacy for the guests."

The timber shelters were prefabricated before being positioned on site, helping to limit the impact and construction issues on the remote location. Formed from two layers of wood, the outer cladding is designed to turn silvery grey over time, while the internal layer will retain its colouring.

Glazing is glued to the exterior of the structure, helping to create a smooth facade designed to withstand the island's severe winds as well as provide unobstructed views of the sea and island.

"The cabins are designed to offer their guests shelter and comfort while at the same time underlining the dramatic experience of the elements outside; the sea, landscape, changing lights, weather and different seasons," said Stinessen.

An 18th-century farmhouse, which is set back from the coast on a grassy plain, was restored and converted into a communal kitchen, dining area and library, stocked with books from Borges' personal collection. A large panel of glazing added to one gable of the timber structure affords views towards Lofoten mountain in the north.

Northern Norway has seen a lot of investment in tourism in recent years, with a number of viewing platforms and visitor facilities being created along the country's national tourist routes. Snøhetta is also working on a hotel in nearby Lofoten.

Photography is by Siggen Stinessen.