Four interconnected volumes are arranged around a patio at this house in Barcelona province, which also incorporates corridors and voids for displaying art.

The building is located in a residential area of the town of Valldoreix, prompting the architects to develop a design with its more open surfaces facing onto a secluded inner patio.

The site's sloping topography means the patio is set below street level and is therefore less exposed. Glazing that wraps around the facade at this level is protected behind louvred screens.

Four geometric blocks set at varying angles fan out around the perimeter of the building, with double-height voids between them creating a visual connection between the floors.

"These four bodies are resolved according to the structure, granting a clear and coherent functionality to the interior spaces," explained Girona-based studio 05 AM Arquitectura

"The project is a volumetric response to the setting, protected from the presence of adjacent buildings, and enclosing an exterior sunlit space, creating an interesting relationship with its interior exhibition spaces at the same time."

Some of the spaces on the ground floor are used for displaying and storing artworks, with service areas and a garage also accommodated in two of the four blocks.

The voids between the rooms and the circulation spaces connecting them provide additional exhibition areas.

"This project is half a home and half an exhibition space for contemporary artwork," said the studio.

One of the tall voids contains the staircase, which features a sweeping green balustrade and timber treads. Its underside displays the cast concrete used to form its structure.

The stairs lead to an open space housing the main living area, which is lined with glazing along its inner edge. The lounge and kitchen are positioned within spaces that branch off from the main spine of the house.

The two other volumes contain bedrooms, with the tallest structure also accommodating another bedroom suite on its second floor.

The four boxes each have different proportions and ceiling heights appropriate to their function, with high-level windows helping to direct daylight into the interiors.

A balcony extending around the inner surface of the space overlooks the courtyard, which can be reached using a staircase at one end of the balcony.

The building's external surfaces feature a uniform grey render, with plants and trees slotted into gaps between the blocks and used to line the entrance ramp.

Internally, the lower level's floor, walls and ceiling feature raw, exposed concrete, while wooden flooring in the living areas above is complemented by concrete surfaces with a smoother finish.

The studio previously added marble details to a 19th-century house in France and completed a split-level terraced house in Girona with seating built into its staircase.

Photography is by Adrià Goula Sardà. 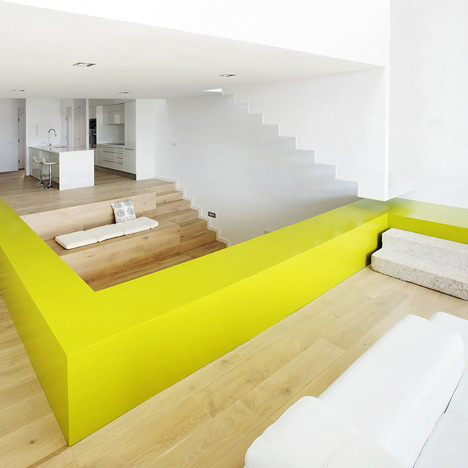 House in Casavells by 05 AM Arquitectura