Lee deconstructed the lowercase letters of the Bodoni type – a serif face created in the late eighteenth century – and reduced it to 26 individual elements.

This included the serifs that form the top and bottom of the alphabet and the stems and bowls that make up the rounded letters such as o, e, c and b.

Neither a or g contain any elements that overlap with other letters, so were created as standalone elements.

The designer then built a pedal-operated wooden machine complete with a pen, along with a set of "maps" the operator follows to recreate each Bodoni letter.

"Typefaces are really close to our daily life, but actually we cannot realise them without a computer because they are originally invented for the purpose of mass printing production," said the designer.

"We usually say 'I'm writing' when we type, even though it is not an actual behaviour of writing but just pushing the button. I decided, literally, to write a certain typeface."

Recreating a single letter a with the writing tool requires 74 strokes, 60 curves, and two different widths and directions of the pen. Lee spent two hours writing the

Lee spent two hours writing the a on her first attempt – which took 43 pedal steps – but says with practice she's reduced the time to 30 minutes.

"We can reproduce an infinite quality of identical letters of a with the push of a button," she said. "The letter a in my project takes a long time, and the results will have all different shapes, depending on the speed of the hand and the spread of ink."

The project, entitled Craftsmanship; How to write Bodoni lowercase, was shown at Dutch Design Week 2016. Other student projects on display include furniture made from processed pine needles, and a gun designed to fire tears. 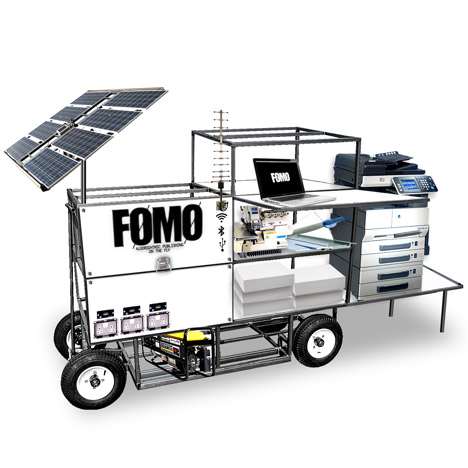