Dezeen is now the most popular online design magazine in the world, according to statistics from web data firm Alexa.

The latest Alexa rankings place Dezeen among the 7,500 most popular websites on the planet, ahead of all other contemporary design websites.

Dezeen is ranked at 7,084, having climbed several thousand places over the last year, while rivals have declined.

Dezeen is also the second most popular architecture magazine, coming behind ArchDaily, which has a global ranking of 3,360. Curbed is at 7,437 while Architizer is placed at 19,954.

Alexa, a commercial service that gives insights into the popularity of every website in the world, is regarded as one of the most authoritative benchmarks of web traffic.

We celebrated our 10th birthday last month, prompting tributes from architects and designers from all around the world. 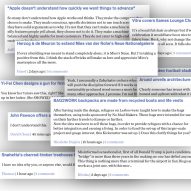 Dezeen is the world's most commented architecture and design website