Architects Hollwich Kushner and Handel Architects have completed an apartment tower in New Jersey, with a rectangular form and gridded windows similar to the 432 Park Avenue skyscraper in nearby Manhattan.

The skyscraper is located in Jersey City's Journal Square business district. It is the first of three towers planned for a new mixed-use development dubbed Journal Squared.

The 53-storey tower is meant to serve "as a beacon for a neighbourhood that hasn't seen any large-scale development in decades," said Hollwich Kushner, or HWKN, which was founded in 2007 by Matthias Hollwich and Marc Kushner. The two architects also co-founded the architecture website Architizer.

Clad in aluminium panels, the high-rise building consists of a slender shaft rising from a splayed base. Its white gridded facades have drawn comparisons to 432 Park Avenue, the supertall Manhattan skyscraper by Rafael Viñoly.

The team was mindful of both regional and neighbourhood scales while conceiving the tower.

"At the regional scale, the building cuts a distinct silhouette," the studio said. "Set on a bluff 85 feet above sea level, it soars above adjacent buildings, reminding every New Yorker where Journal Square is."

To respond to the neighbourhood context, the architects created smaller volumes in the lower portion of the tower to match the size of surrounding buildings. Long, recessed cuts in the north and south facades align with the tower's entrances.

As the building approaches the ground, it spreads outward, forming a retail space and covered pathway that leads to a rail station, which links the district to New York City. As part of the project, the team is overhauling an entrance to the station.

"Jersey City is a strong urban centre in its own right, but it is also an extension of Manhattan," said Hollwich. "We created a powerful landmark to stand at the new front door of the Journal Square PATH station."

The building contains 538 rental apartments. Amenities include a yoga studio, an outdoor pool and a "sky lounge" on the 53rd floor.

The project, which broke ground in 2014, was funded by property developer KRE Group and National Real Estate Advisors.

The Journal Squared development calls for two additional towers that will rise 63 and 71 storeys. The entire project will encompass 2.3 million square feet (213,600 square metres), with more than 1,800 residential units.

Other projects by Hollwich Kushner include the conversion of an old factory in Philadelphia into the Pennovation Center, which contains labs and co-working areas for entrepreneurs and researchers. The firm also designed the Fire Island Pines Pavilion in New York and Wendy, a summer installation at PS1 Contemporary Art Centre in Queens.

Photography is by QuallsBenson
Renderings by Crystal CG 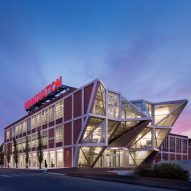