When renovating this apartment in Barcelona, Bajet Giramé Architects stripped it back to reveal the building's 1970s architectural features.

The Mitre Apartment, located on a long avenue in the western part of Barcelona, has been occupied by the same couple for the past 30 years.

The space was separated into small rooms and corridors, which was suitable when their children lived at home, but since they've left, the couple desired a more open-plan space.

Although the apartment featured large windows on both its north and south sides, the maze of corridors and rooms stopped any natural light from passing through.

"The aim of the project was to make the apartment again with significant setting and character changes," said Bajet Giramé Architects.

"This would be achieved two-fold – by unveiling the hidden qualities of the 70s architecture and by defining a new series of suggestive settings."

Throughout the apartment, the architects uncovered the original architecture and structural details. Steel columns and beams were left in place, while the vaulted brick ceiling – typical of Barcelona properties – were revealed.

Walls were replaced by a series of timber structures, which double up as shelving and storage units.

A small panelled guest room was created for the couple's grandchildren, and a second space has a desk and a sofa bed to accommodate guests.

"The space now crosses diagonally the house, bringing the sunlight from one end to the other," said Bajet Giramé Architects. "They can see the street from the kitchen."

"They now appreciate the beauty of the triangular shape of the space, and they understand the sequence of smaller and larger settings that their life occupies," the architects continued. "They have a sense of orientation, a sense of place."

Other recently renovated flats in Spain include a light-filled basement conversion in Barcelona and an apartment with crooked walls that create visual breaks in its layout. 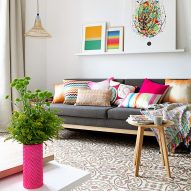