A concrete roof with concave sides sits atop scooped glass and wood walls at this house in Portugal, which is captured in a film starring a child on a red tricycle.

Portuguese studio Spaceworkers designed Cabo de Vila for a young couple who asked for an unusual looking house to occupy a rural site in Paredes hemmed by woodland.

The studio wanted the shape of the house to fill the plot in the base of a valley, and so designed a large concrete roof with scooped sides and corners that stretch outwards.

A concrete base follows the same shape as the roof. Both feature vertical markings on their edges, created by the boards the concrete was set against.

Walls made of blackened wood and glass are sandwiched between the slabs, offering the residents plenty of views to the greenery and houses in the distance.

"We wanted a shape that can fill the void left by the valley and at the same time we wanted this new shape to embrace and reflects the surrounding green areas giving its users a special perspective on the landscape," said the studio.

"The proposed volume materialises its shape through two concrete slabs with its concave sides, allowing a light glass and wood wall to unroll between them, which in a positive and negative game let the interior of the house communicate with the exterior," the architects continued.

The facade is set slightly back from the edge of the concrete slabs, creating a narrowed covered walkway around the house with larger viewing platforms at the corners.

A set of shallow steps fan outwards and lead from the road to one of these covered corners – the house's entrance – while another acts as a parking space for the owner's motorbike.

An irregularly shaped cut-out in the roof creates an open-air courtyard for private sunbathing and relaxing in the centre of the house.

The courtyard is surrounded by glazing and planted with a tree. It forms the heart of the social areas in the house with an open-plan area surrounding it.

The house is captured in a movie by Building Pictures, which follows a young girl on a tricycle as she travels through the house. She passes a long study desk and electric guitar round to the living area and television room, which features a hanging wood-burning stove.

Here she stops to observe the views to the distant houses and the residence's swimming pool, which is lined with green tiles and cornered by L-shaped decking made of black wood panels.

She gets back on her bike to cycle further round the house to the kitchen and dining room, and on past the white curtain wall that separates the more private areas.

"The central courtyard welcomes anyone who enters the house and organises all the common spaces around it like a no end space," explained the architects.

"Here, there are no barriers between the different spaces, only an organic geometry that establishes hierarchies between them and that allows mutual visual contact."

The curtain wall divides the floor plan to separate the open areas from the private spaces, including two more bedrooms separated by a bathroom.

The large master bedroom is also placed behind this partition and features a short corridor that leads into an dressing room.

The bed occupies one side facing out towards views, while the ensuite bathroom is place on the other side. It features a large bath at its centre and an open shower room covered with black tiles.

"Like in the common areas the main bedroom is a fluid space without doors, where the hierarchy of the relations between the closet the bathroom and the sleeping area shapes the space," said the architects.

Thin white curtains line the glass walls in the bedrooms, allowing plenty of light in while also offering privacy.

The garage is located behind the ensuite bathroom with sliding doors that open to the house's driveway.

Other projects by the studio include a house featuring cantilevered and transparent stories, and a long residence with textured concrete walls. 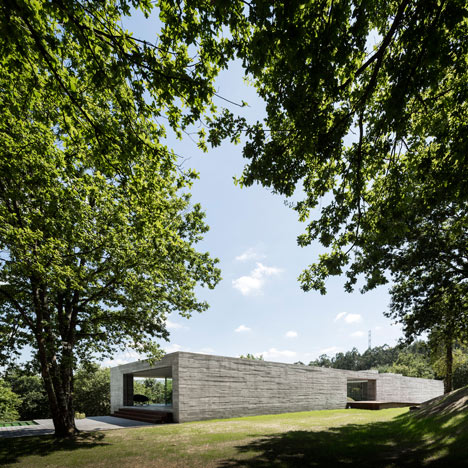