As of today, Uber app users in San Francisco have the option of hailing a self-driving taxi.

The taxi-hailing company has released a fleet of self-driving Volvo XC90 cars onto the streets of San Francisco, following successful testing in Pittsburgh.

When requesting a taxi, passengers are able to opt in if they want a self-driving car. Similar to the Pittsburgh vehicles, the cars aren't completely driverless, as they have a human counterpart present for backup.

In a blog post, the head of the company's advanced technology group, Anthony Levandowski, described self-driving vehicles as the "core of Uber's mission of reliable transportation".

He also predicted the future of ride-sharing transportation to be a mix of both human drivers and self-driving cars.

"We know that when people can get an affordable, reliable ride across town, things change for the better," he said. "Cities become safer, cleaner, more efficient and more affordable."

"Ride-sharing also helps cut into automobile-related deaths and drunk driving. It complements public transit, getting people to places that aren't well served by other forms of transportation."

Uber made a deal with Volvo in August to purchase 100 vehicles by the end of the year, and each has been kitted out with lidar (radar based on light), wireless technology and seven different cameras.

The introduction of Uber's autonomous fleet comes after the US Department of Transportation unveiled its plans to eradicate road accidents by increasing the number of self-driving vehicles.

The tech giant has now spun off its self-driving car project into a separate company called Waymo.

Uber was set up by Travis Kalanick and Garrett Camp in 2009 as a black car service for 100 friends in San Francisco.

It allows users to order a taxi on demand, with payments automatically deducted from card details stored in the app. 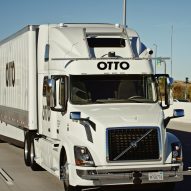 Self-driving truck hits the road in the US to deliver 50,000 cans of Budweiser