Warsaw studio Projekt Praga has created a suite of pared-back and plant-filled holiday apartments inside a 19th century brewery in southeast Poland.

Projekt Praga played a key role in the overall renovation of the historic Vetter Brewery complex located in the city of Lublin, within which they created the "aparthotel".

The Perla Brewery apartments form the second phase of renovation, following the earlier addition of a beer house within the adjacent part of the building.

The Warsaw-based studio wanted to preserve as much of the existing architecture as possible, while creating contemporary accommodation within.

"The idea was to develop the brewery both in a commercial and public way, keeping all the historical buildings; to give back to the city this important place, making it more present in everyday life of their residents and tourists," architect Zofia Stachura told Dezeen.

The aparthotel comprises seven apartments with floor areas varying from 25 square metres to 62 square metres, and offers rentable spaces for individuals as well as bigger parties visiting the Polish city.

Labelled by letter, six of the apartments are arranged behind the wooden doors of the former brewery's first floor corridors, which are accessed by two staircases. The remaining apartment is located on the ground floor.

The self-catered rooms – each varying in arrangement – are minimally finished with an open plan arrangement and large wooden boxes that incorporate bathrooms and storage.

Pared-back finishes throughout include white walls and painted herringbone floors. Colour is only present in the plants and a series of Polish tourism posters by artist Ryszard Kaja, introduced to "combine typical hotel elements with more homely motives".

Pot plants are dotted among pieces of traditional furniture, including grey stools and a black table and chairs made in the local furniture factory Fameg.

Further contributing to the pared-back finish of the space, the designers teamed wire armchairs from Danish design brand Hay with light fittings that have exposed bulbs and protrude from the walls.

The wooden box in each of the rooms eradicates the need for partition walls, with a kitchenette, wardrobe and working space placed in recesses around its edge.

The cube encloses an entirely white bathroom, complementing the rest of the apartment’s minimal aesthetic.

Partition walls only feature in the larger of the apartments, where bedrooms are separated from the main space and comprise beds raised on recessed platforms and accessed by a small step.

Finished in muted natural tones and filled with diffused light, these separate bedrooms contrast with the bright white living rooms, marking themselves places to relax.

Projekt Praga's previous projects include a secluded mediation space which protrudes from one side of an art studio in Warsaw.

Other apartments with a minimalist aesthetic include a Tel Aviv home with geometric metal shelving and a kitchen hidden behind folding doors. 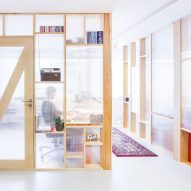