Uber's fleet of self-driving cars has been ordered off the streets of San Francisco until the company acquires the necessary permit, as footage emerged of two of the vehicles running red lights.

Uber launched the cars in the city yesterday, but California state regulators have since demanded the company secures a permit that allows companies to test driverless vehicles on public roads.

Uber acknowledged the existence of the permit system in its initial announcement yesterday but said that having looked into the rules, they determined it unnecessary to obtain one.

"First, we are not planning to operate any differently than in Pittsburgh, where our pilot has been running successfully for several months," said the head of the company's advanced technology group, Anthony Levandowski. 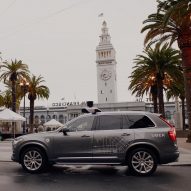 Fleet of driverless Uber cars takes to the streets

After the company launched its cars without permits, the California department of motor vehicles (DMV) wrote to Uber telling it to end the launch of its self-driving service, or face "legal action, including but not limited to, seeking injunctive relief".

Dezeen has requested comment from Uber on whether or not it will be ending its service in accordance with the DMV's request, but it is yet to respond.

The news comes on the same day that driverless vehicles were caught running red lights – something the company has blamed on "human error", according to the Guardian.

It is unclear how law enforcement would address these kinds of violations.

Asked by the Guardian how the San Francisco police department would respond to a self-driving Uber running a red-light, officer Giselle Talkoff said: "I don't even know. I guess we could pull them over."

Her uncertainty was echoed by San Francisco resident and writer Annie Gaus, who – after a self-driving Uber almost collided with her car – said she doesn't think "anybody has a good understanding of how this works in a city context".

The introduction of Uber's autonomous fleet comes after the US Department of Transportation unveiled its plans to eradicate road accidents by increasing the number of self-driving vehicles.