Miami firm DOMO Architecture + Design has created renderings that show a series of landscaped features along the border between the USA and Mexico instead of a fence or wall.

The Beautifying the Border project suggests a series of landscaped features that the studio hopes would be less imposing than the present setup.

"Currently, there is an existing fence and other natural conditions acting as a border," DOMO principal Francisco Llado told Dezeen. "We are manipulating all manmade fences or walls that create an aggressive division between both countries by means of design."

"By removing the idea of a wall or a fence, we remove the negative social, cultural and physical connotations associated with visual and physical barriers," added principal Robert Moehring.

The studio is the latest to reimagine the border, after Donald Trump outlined plans during his presidential campaign to build a wall along the 1,954-mile (3,145-kilometre) stretch of land where the two countries meet.

Earlier this year, Mexican firm Estudio 3.14 visualised a giant pink wall influenced by the work of Luis Barragán to show the "gorgeous perversity" of the idea.

DOMO's ideas vary for the different types of terrain and climate. Verdant areas could be separated by a ha-ha – a turfed slope that declines to meet a vertical retaining face.

Based on ancient Chinese sunken ditches, the features were used in 17th- and 18th-century country gardens around Europe to keep livestock from venturing onto lawns without the visual impact of a wall.

"The slope is inspired by the contrition of a ha-ha wall, which will maintain visual connectivity and stop any potential tunnel connectivity," said Llado.

In the desert, a canyon that snakes through the landscape could also prevent crossing without creating an eyesore.

The Coastal Border Beautification area would comprise a public park to be shared by citizens of nations, but with areas for each separated by earth formations. This could stretch into the sea as a pier. 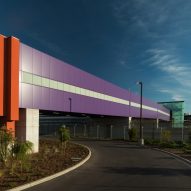 DOMO estimates that 750,000 unused shipping containers – now frequently used in architecture projects – could be used to help form the massive landscape features. These could be either hidden under earth or left exposed.

"Our intent is to create landmark architecture that is highly sensitive and responsive to its context and climate while establishing a perfect equilibrium of design, sustainability and economic viability," Llado said.