White accordion partitions, thin marble counters and furniture made from coloured mirrors feature in this petite apartment overlooking the rooftops of Paris.

French studio Ubalt Architectes renovated the apartment, located in a 17th-century building in the district of Le Marais, to create a contrast between its historic shell and contemporary interior.

The renovation features custom furniture made from a mix of materials — including marble and coloured mirrors – and arranged in what Ubalt terms "pictorial compositions".

The studio's design aims to maximise space within the flat, which at 36 square metres is just slightly bigger than most micro apartments.

Ubalt started by "visually lengthening" the flat, rearranging its rooms to stack up in succession. The front door opens immediately onto the kitchen, which leads onto one open space that serves as a living area, dining room and office.

Beyond that lies a bedroom separated by white, accordion-style partitions.

The minimalist interior is entirely washed in white from its ceiling to its floorboards.

"The flat has been entirely painted in white to emphasise the specific texture of each material," said the architects. "This work on texture can be found in the new elements that have been used: accordion, mosaic, marble and lacquers in a cameo of white."

To further the illusion of space, Ubalt designed built-in furniture for the apartment that is slimline and incorporates mirrors.

"The aim of the project is to create a stroboscopic effect," said the architects. "Like the partition, no piece of furniture will reach the ceiling in order to expose the beams."

"The same visual continuity is facilitated at the ground level by hollow joints and mirror covered items of furniture legs."

These mirrors also introduce the apartment's only touch of colour – a pink tone for the legs of a desk on one side of the living area, and green on the leg of a dining bench on the other. Both benches are topped with a thin marble counter.

Ubalt titled the renovation project Les Enfants Rouges, a name it shares with a restaurant in Le Marais.

One of Paris' oldest neighbourhoods, Le Marais is also home to a white-fenced playing court squeezed into a narrow strip of land and a Brinkworth-designed retail space for New York streetwear brand Supreme. 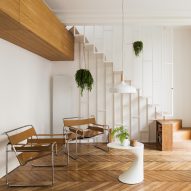