London studio Brinkworth has overhauled the interior of an old building in Paris to create a retail space for New York streetwear brand Supreme (+ slideshow).

Prior to the renovation, the store featured an awkward layout with a small room at the front and a corridor leading to a larger area to the rear.

Instead of changing the building's plan, the designers decided to utilise it – creating an "unorthodox" interior with separate entrance room and retail area.

"Unravelling these challenges gave us the opportunity to create a suitably unorthodox store," said the designers. "A sensitive planning process led to the site undergoing rigorous restoration and the outcome is a honed and clean envelope, forming the foundations for the new store."

The store's black-coloured facade stands out from the brick of the neighbouring buildings. A seven-foot-tall sculpture, designed to look like a priest by skateboarder and artist Mark Gonzales, is visible from street level through large windows. 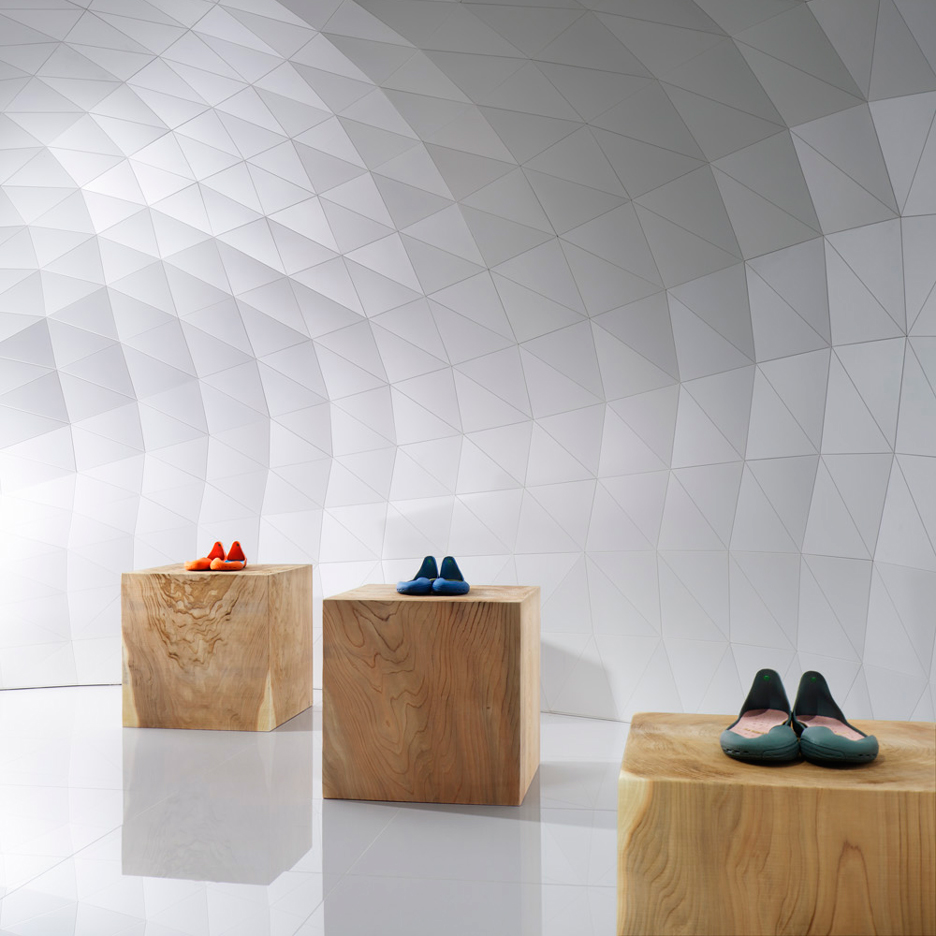 In the entrance of the store, a wall installation by artist Weirdo Dave creates a backdrop for Gonzales' sculpture. A large monitor in the corner is used to show a skate film specifically commissioned for the opening featuring well-known Parisian skaters.

"Supreme continually selects and engages with creatives on many platforms of the business," said the designers. "In the same way, the making of the stores also represents a successful union of multiple collaborations."

Since the early 1990s, Supreme has commissioned skateboard decks by artists including Jeff Koons, Damien Hirst and The Chapman Brothers.

Some of these decks are displayed on a wall connecting the entrance room with the main area towards the rear, and are organised in a chronological timeline of the commissions.

This angled passage also obscures a view of the main retail area from street level.

Towards the back of the store, original panelled roofs were restored – allowing natural light to flood the interior.

Display fixtures are constructed from European oak and galvanised steel tubing. As with all Supreme stores, garments are positioned around the perimeter of the space to allow for a clear presentation of the product.

"At the moment most retailers want to do more and more to make a store stand out, but I admire James's confidence to only utilise the perimeter of a space to display the product," said Adam Brinkworth. "This has proven to be an unique and commercially successful approach for Supreme."

Brinkworth was established in 1990 in London. Since then, the studio has created interiors for chicken restaurant chain Bird, and cycle wear brand Rapha.