Locally based AR Design Studio was asked by the owners of a three-storey-residence in Winchester to increase the size of their living spaces, bring in more natural light and maximise views out over the landscape.

Called The Hill House, the property was extended with the addition of two new volumes, both clad in grey-toned fibre cement to contrast with the existing red brick walls.

At the rear of the house, the architects extended the central floor out, creating a more open-plan, light-filled living, dining and kitchen space. They then added a large window wall that offers an uninterrupted panoramic view out.

Some of the glass panels can slide open, but a glass balustrade set behind the glazing acts as a safety guard.

AR's second addition is a two-storey-entrance hall at the front of the house, featuring a double-height window and a cross-shaped frame.

"The existing layout was dark, outdated and denied the occupants an appreciation of the stunning views of which the house commands," said the architects.

"At the rear, an elongated insertion frames the new aspect of the house," they continued. "At the front, one now enters the home via a new double-height box which has created a visibly welcoming and clear entrance.

The house's entrance leads through to a split-level landing offering snippets of the view. From here, a set of steps lead down to the new light-filled living spaces on the the middle floor.

White partitions offer some separation between the three spaces, but are punctured by large openings.

Minimal furnishings feature in these areas, including a fitted fireplace in the living room, while the kitchen is more simple, with a set of white wall cabinets and a pale wooden central island.

"In this new space, the kitchen – a clean and seemingly simple space – encompasses clever touches, which hide the pantry and utility rooms with secret kitchen unit doors," the architects explained.

There is also a more formal dining area on this level, which is closed away at one end to provide the owners with a large private space for entertaining guests.

Bedrooms and bathrooms are split between the floors above and below, where glass doors lead out to the garden.

White-painted walls and dark stone flooring feature throughout the building.

"The entire property has been finished with a visibly neutral palette," said the architects, "primarily designed to allow the walls and floors to be decorated by the ever changing play of shadows and dappled light that filters through the trees and dances around the spaces throughout the day."

AR Design Studio was founded by architect Andy Ramus. Other projects by the studio include the extension comprising a timber-clad box and the conversion of an old stable block into a three-bedroom family house. 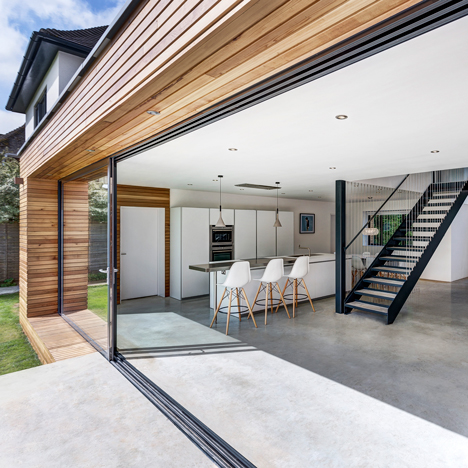