The wayfinding is based on toys used to help children improve motor skills and spatial awareness, with many of the signs made of individual wooden blocks that slot into or stack on top of one another.

The blocks are held in a wooden frame and sit on a magnetic base, allowing them to be rearranged as needed. Featuring a "lighter, more contemporary" colour palette, each of the signs contains a different configuration of wooden pieces.

"We wanted to achieve a unique wayfinding design which could speak both to parents and children," founder Michael Lugmayr told Dezeen. "

"This presented us with the opportunity to have some real fun with the design at the same time," he added. "We hope the children will find the wayfinding as toys on the wall, and parents use it as signage."

Play rooms are marked out by bright contrasting colours, while storage spaces have brown and black blocks. The shapes are also repeated in the building's exterior signage.

"Concept and material generate an effective system that is functional, never rigid or contrived," added Toko.

"Natural timbers, colours, typography and form complement the geometric nature of the interior and its purpose."

The studio selected sans-serif DIN Rounded as a typeface, for its legibility and also to reflect the "soft and friendly character" of the space.

The wayfinding is part of a complete overhaul of the building, which has been transformed by ABA Architects into a three-level centre with five playrooms, indoor playgrounds and a rooftop open-air space. 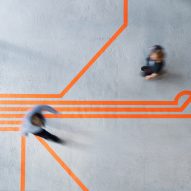 Signage based on circuitry designed for east London tech hub