Parks with terraced fountains and chunky concrete formations are among works by American landscape architect Lawrence Halprin featured in a show at the National Building Museum in Washington DC.

Titled The Landscape Architecture of Lawrence Halprin, the exhibition presents more than 50 new photographs of Halprin's projects, including a stone-lined corridor for Yosemite Falls in California and the Brutalist-style Freeway Park in Seattle. The images "beautifully depict how these landscapes have matured".

The show also includes original drawings, notebooks, and other artefacts from archives stored at the University of Pennsylvania, along with drawings from the Edward Cella Art + Architecture gallery in Los Angeles.

Recognised as one of the most influential landscape architects of the 20th century, Halprin is credited for helping reinvigorate US cities.

"Halprin helped to change perceptions about American cities and urban landscapes at a time when such places were often neglected," said Chase W Rynd, president of the National Building Museum.

A Brooklyn native, Halprin was born in 1916 and died in 2009. His work often features robust, expressive forms influenced by natural systems and structures. Many projects include terraces with flowing water. 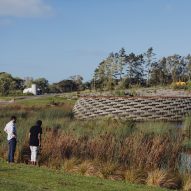 "Over a career spanning more than five decades, he designed significant projects across the United States and even overseas," the show organisers stated.

Halprin studied at Cornell University, the University of Wisconsin and Harvard University. He established an eponymous firm in San Francisco in 1949.

"His firm became a seedbed for many talented designers now celebrated in their own right, and the innovative techniques that he pioneered changed the field of landscape architecture forever," the organisers said.

Halprin initially focused on residential gardens, housing projects and campuses and later shifted to urban landscapes. His Ira Keller Fountain in Portland, Oregon, completed in 1970, was hailed by architectural critic Ada Louise Huxtable as "one of the most important urban spaces since the renaissance".

"By animating a wide array of urban areas, including industrial zones and spaces around freeways, with designs that were artistically composed and ecologically sensitive, Halprin showed that landscape architecture could be a dominant force in re-invigorating American cities," the organisers said.

Halprin received numerous accolades, including the prestigious National Medal of Arts, given by the president of the United States.

The exhibition – which marks the centennial of Halprin's birth – was curated by the museum and The Cultural Landscape Foundation, a nonprofit started in 1998 to educate the public about important landscapes.

It was organised as part of foundation's Landslide program, which puts the spotlight on threatened works of landscape architecture.

Recent landscape projects in the US include the addition of rolling hills, playgrounds and art installations to New York’s Governors Island, a project by West 8, and a proposal to create a public park in downtown Los Angeles by OMA and Mia Lehrer + Associates.