Opening to the public later this month, The Hills on Governors Island takes up 10 acres (four hectares) of park space.

Measuring between 26 and 70 feet (eight and 21 metres) in height, the four grassy mounds provide spaces for walking, play and other outdoor activities, as well as panoramic views of the city's skyline.

"It maximises the sense of anticipation, pulling a visitor through the park or signalling a place to sit and stay just a bit longer. The topography defines the very character of the area."

The lowest of the hills, Grassy Hill, has gentle slopes. It allows views across the island from its top.

At 36 feet (11 metres) high, Slide Hill is home to four slides, including the longest in New York City. 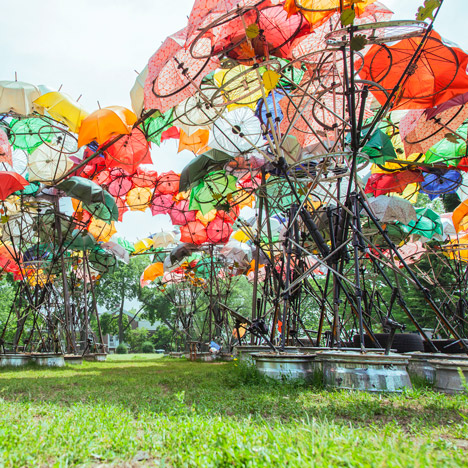 To reach the top of the highest Outlook Hill, visitors can meander up accessible paths or climb the Scramble – a rocky slope constructed out of reclaimed granite seawall blocks.

The skylines of Manhattan, Brooklyn and New Jersey, and the Statue of Liberty, can be seen from the summit.

Each of the bluffs is constructed from demolition debris and lightweight pumice, stabilised by reinforcements and covered with more than 860 trees and 41,000 shrubs.

Paved pathways with white concrete edges curve between the undulating landscape, which appears like a series of petals when viewed from above.

Situated in New York's harbour, Governors Island has been transformed over the years from a historic military base to a public park.

It is accessible by ferry from Manhattan and Brooklyn, and the hills will open for the season from 19 July to 25 September 2016.

With offices in Rotterdam, Belgium and New York, West 8 has worked on a variety of landscape projects in the US and internationally since it was founded in 1987.

Recently completed schemes include a plaza outside the remodelled Rotterdam Centraal station, while proposals for a new Philadelphia city quarter and a botanical garden in Houston are under development.