This foldable electric scooter features a USB port for charging all its user's smart devices at once, and is lightweight and compact enough to carry on a bus or train.

On display at the Consumer Electronics Show (CES) in Las Vegas this week, the URB-E Sport is on a cheaper and lighter version of the original URB-E that was shown as a prototype at the same event in 2014.

Intended to "revolutionise urban mobility", it is designed for commuters to ride to and from public transport hubs, and then take with them on board.

"With 70 per cent of the world's population living in urban cities by 2025, commuters will need efficient, compact, and sustainable modes of transportation to get them from home to the office to everywhere in between," said its creators, California-based startup URBAN626.

"By linking city dwellers to public transportation efficiently and effectively, the URB-E alleviates the pain points that urban commuters feel everyday dealing with traffic, fuelling up, and scarce parking."

One of the most significant updates is to the charging system. The single USB port – enabling a user to charge their phone while riding – has been replaced with four USB ports, a USB-C port, and the option of two AC power slots on a battery that now pops out from the frame.

However, its 20-mile (32-kilometre) range on a single charge is reduced to 16 miles, and its top speed is just shy of the previous 15 miles per hour.

For those wanting more power, URBAN626 is also launching the URB-E Pro. This edition has the same speed and range as the first model, but also features 10-inch (25-centimetre) tyres that can handle off-road conditions.

All three models fold up into a compact form that makes them easier to carry, and can be pushed by the handles like a trolley while in this state.

Users can customise their vehicle by placing coloured inserts behind circular holes in its aluminium and carbon-fibre frame, which is also available in a variety of hues. 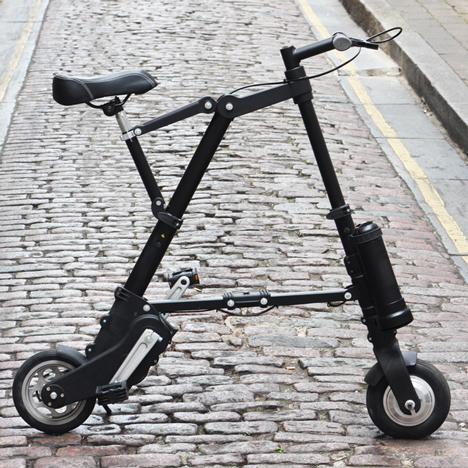 The growing trend for electric vehicles last year looks set to continue in 2017. Also at CES, which takes place from 5 to 8 January 2017, startup Faraday Future debuted an electric car to rival models by Tesla.

An electric bike with a battery that doubles as a boombox and the world's fastest electric supercar were both also recently unveiled.