Electric bike manufacturer Noordung has designed a bicycle with a battery that charges phones on the go and functions as a backup speaker.

The detachable battery sits atop the company's Angel Edition bike, where it sits upon a carbon fibre frame. Once removed, it doubles as a speaker that can play 100 hours of music, controlled by the user's phone.

"We believe commuting is not just moving from one point to another," said Noordung. "For us it represents a journey of joy."

For those running low on power, two USB ports offer room to charge phones or other devices on the go. The multifunctional battery is also able to measure and report on air quality, as well as recommend cleaner routes.

As to powering the bicycle, Noordung claims the battery can carry riders for 30 kilometres from a single charge.

The company will hand make a run of only 15 prototype Angel Edition bikes to start with, costing €9,760 each. It plans to seek feedback from the initial buyers who will become "friends, a part of our family, and the ambassadors of the Noordung idea".

"They will be test-riders, debate partners in the future development, and possible first investors in the Noordung company," it adds. "In short – the buyers of these bicycles will be our angels."

Although the bike is currently still in prototype stage, the company promises to fix any problems that arise free of charge and will offer complimentary upgrades for the future.

Several startup companies have set out to tackle the electric bike market, creating everything from cycles that charge themselves to models that can be folded up in seconds. 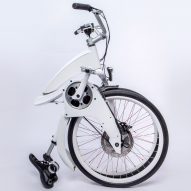 Electric bicycle Gi FlyBike can be folded up in a second