Bathrooms and storage are hidden behind white panels inside this Berlin apartment that Raum404 has recently renovated, allowing it to be used as a home and a gallery.

The 130-square-metre flat, which is located on the first floor of a typical 19th-century Berlin apartment block, is owned by an artist who does not live in the city permanently.

Swiss studio Raum404 was tasked with designing a flat that could be used privately as a home, but could also be opened up to the public for exhibitions.

In response, the architects kept the interior of the apartment as spacious and minimal as possible by hiding many components behind white doors.

"When the cabinets are closed, the space is completely white, abstract and neutral," architect Oscar Buson told Dezeen. "So the relationship between the piece of art and the spectator is as direct as possible."

The architects knocked down several walls to create a large open-plan space at the front of the building, which can act as an exhibition space.

They retained the 3.5-metre-high ceilings, as well as four full-height windows and a door that leads out to a small balcony with handmade cement tiles.

"We decided to reinforce the classical character of the apartment," said Buson. "This kind of ‘hôtel particulier' exhibition space is complete missing today in a very alternative city like Berlin." 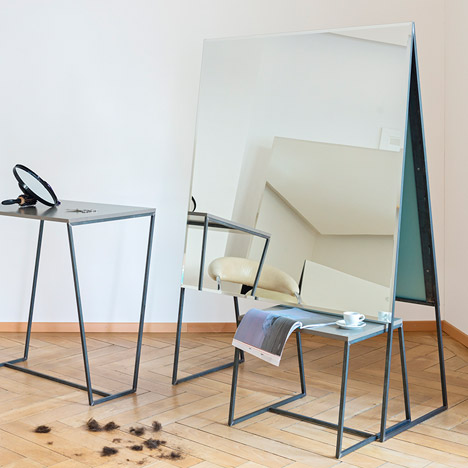 One end of this space is occupied by a simple kitchen with white cabinets and a black granite alcove. The only piece of furniture in the kitchen is a freestanding granite worktop with triangular steel legs, intended to be easily moved.

In the entrance hall, further storage and a bathroom are hidden behind white panels. One of these acts as the door to a bathroom, which has a black tiled floor, black-painted walls and steel fittings.

A mirrored partition divides the bathroom into two sections: a dry area with a toilet and sink, and a shower area. One of the other panels corresponds to this full-height shower, allowing it to be peered into from the entrance hall.

"When the panels are open and the light is on, the shower is visible through a translucent mirror, thus unifying both the private and public spaces," said the architects.

White cabinets also run along walls in both the library and one of the two bedrooms, providing more storage space as well as leading to an en-suite bathroom, which is fitted out with sand-coloured tiles.

"The second bathroom is intended for private use only and it was created with light, warm materials to functionally oppose the other," said the architects.

Oak parquet flooring now runs throughout the apartment, whereas previously it had only part-covered the space.

Raum404 is based in Zurich. The studio also recently designed a set of freestanding mirrors and furniture for a Zurich hair salon.