This mobile breast pump on show at CES doesn't use any cords or bottles, allowing new mothers to express milk without connecting to a power socket or getting undressed.

The Willow breast pump launched last week at the Consumer Electronics Show (CES) in Las Vegas, and claims to be the world's first "truly mobile" way for women to produce and store milk.

Breast pumps, which draw milk from a woman's breasts by suction, typically involve bottles and tubes, all hooked up to a relatively robust machine.

But by conducting its own research, Willow found that 89 per cent of mothers wanted a hands-free option, and 67 per cent said their ideal pump wouldn't require them to undress.

"We knew there had to be a better solution," said John Chang, chief technology officer at Willow. "Willow allows women to achieve their breastfeeding goals without pressing pause on their own lives." 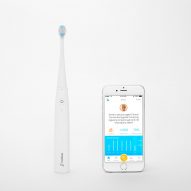 Willow's teardrop-shaped machine sits discreetly underneath a woman's bra. It quietly collects milk in a pouch stored inside the device – meaning women no longer need to be tethered to the wall or undressed while they express milk.

The rechargeable device is also connected to an app via Bluetooth. The app tracks milk volume and time, as well as the points at which the user tends to express milk.

"We believe in bringing dignity and humanity to the breast pumping experience – because women shouldn't have to undress or give up who they are or how they move to be a mother."

Willow will be available to purchase this spring for $430 (approximately £353). The device comes with 24 disposable milk sacks, which are priced at 50 cents each (approximately 40 pence).

The Willow breast pump was among a number of connected devices on show at this year's CES, which took place from 5 to 8 January. Also on show was the "first toothbrush with artificial intelligence" and a brush that tracks and scores the quality of hair.