Called Just Be, the building sits within in Mexico City's vibrant Colonia Condesa neighbourhood, known for its commercial activity and cultural venues. The 1940s Bella Época theatre – an icon in the area – is located nearby.

"We have considered the social life and urban activity of the area as vital elements that serve to integrate the building into its context," said Arqmov Workshop, a Mexico City-based studio.

The five-storey apartment block is situated on the corner of two streets – one a narrow road, the other a busy thoroughfare for cars, bicycles and pedestrians, along with mobile markets for produce.

"We approached this commission by first considering some particular characteristics of the site, especially its location on the corner of two streets with different energies and different impacts both for residents and the casual passer-by," said the firm.

The side facing the quieter road has a glass curtain wall and long balconies, lending a sense of transparency to the building.

For the facade looking over the busy street, the architects added smaller balconies and sheathed a portion of the wall in a screen made of small wooden squares. The design takes cues from a local cultural tradition. 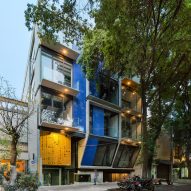 "As a reference for our design we have recalled a particular object that relates to street life in the area: a box made of wooden slats often used to carry vegetables, known in Mexico as 'huacal'," the firm said.

"This element suggests enclosure and isolation and, at the same time, the openness and movement characteristic of a market on wheels."

On the corner, the firm created a small public space with seating made of wooden cubes. The seats are set against a red tiled wall that is illuminated at night, resulting in a welcoming meeting place.

"It is interesting to watch passers-by – whether on foot, by car or bike – interact with this space and with the active context surrounding it," the studio said.

Encompassing 696 square metres, the building "floats" over a base level that contains a carpark. The upper floors house simple apartments with ample glazing.

The design brief required an open zone within the building, which the firm solved by inserting two distinct voids.

One contains a staircase, while the other provides views to neighbouring buildings and aids in cross-ventilation and natural light. The team also added inward-facing balconies.

"The building responds well to the constant dynamics of the cultural, commercial and entertainment area that is Colonia Condesa," the studio said.

Arqmov Workshop's other Mexico City projects include an apartment block featuring a faceted facade made of coloured panels and large windows.

Photographs are by Rafael Gamo