This urban residential building by Arqmov Workshop features a faceted facade sheathed in a patchwork of vibrant laminate panels and large windows framed in black metal.

The residential project – called ColiRoma OneHundredTwentyEight – is located in Mexico City. It is situated within the popular district of Roma Norte, known for its galleries, clubs and restaurants.

Encompassing 2,300 square metres, the building contains seven levels, two of which are below grade. It houses eight apartments, two penthouses and two townhouses, along with a roof garden and subterranean parking garage.

The architects were inspired by the notion that contemporary living happens in both private and public areas, and the idea that public space can help foster relationships between residents.

For the street-facing facade, the team used a patchwork of large windows framed with black aluminium, coloured and perforated laminate panels, and balconies with concrete decks and glass walls.

Canted windows extend over a recessed and sunken ground level. A yellow box imprinted with letters hovers over the driveway, calling attention to the building's vehicular access.

Fronting the main facade is a sculptural wooden bench that was built around an existing tree. The seating unit serves as a place where "pets and people can sit and mingle freely". 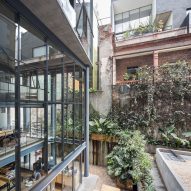 Inside, the entry level features a multipurpose venue – dubbed "urban pit stop" – that can be used as a gallery or meeting space.

"It can also be a common area for building residents and can be turned into an exclusive space for gatherings if required," the studio added.

Linear apartments consist of a series of cubes, with windows providing daylight, natural ventilation and views of the street.

The layout results in "spatial transitions along the linear path of the apartment, exposing light, shade and indoor and outdoor environments", the firm said.

The penthouses and townhouses each have two storeys. Two of the spacious units face the street, while the others overlook the rear of the property.

The roof garden has six private areas, along with a common zone and spa, which are intended to encourage interaction among neighbours.

The whole composition is meant to read as a "communication of elements, permeability of spaces, and interaction of public and private use", the firm said.

Other housing projects in Mexico City include a skinny, concrete-and-glass apartment block by Carlos Marín and a multifamily building by a team of designers that consists of stacked concrete blocks that descend down a slope.