This house in Casablanca by architect Driss Kettani features a windowless white box perched above black- and blue-tiled walls, forming an abstract composition of geometric shapes when viewed from the street.

Villa Agava occupies a plot in the Moroccan city that is oriented from north to south, with its northern facade looking straight onto the adjacent street.

Kettani's design features a blind facade that creates separation from the road, with the western and southern edges opening up to enhance its connection with the south-facing garden.

The building's plan was dictated by the dimensions of the plot, which is surrounded by neighbouring properties, and by local regulations requiring certain setbacks from the boundary walls.

High walls surrounding the site also informed the positioning of the various volumes, while the eastern edge of the building had to match the proportions of the house next door, with which it shares a party wall.

"The disadvantageous north orientation on the street and the presence of existing high enclosure walls are here an opportunity to revisit some of the traditional house codes," said Kettani, "while at the same time maintaining transparency and spatial fluidity."

Beyond the boundary wall facing the street, a path leads through a gravel garden incorporating various Mediterranean plants and grasses towards a set of steps leading up to the entrance.

The front door is tucked behind a black wall to emphasise its privacy, while another surface covered in blue tiles wraps around the corner to provide a sense of connection with the pool and garden beyond.

In addition to the gravel garden, the space between the swimming pool and the boundary wall is planted with tall ornamental grasses, while the rear garden contains a lawn, trees and shrubs.

These different landscaped spaces, designed by local firm Atelier Bertrand Houin, help to bring a distinctive character to each portion of the property.

The house's entrance opens directly into the main living space, which is lined on two sides with full-height glazing looking onto the pool and garden.

A wooden partition containing a fireplace gives the space a focus and separates the lounge from the kitchen and bathroom, while the lack of internal doors enables unimpeded movement around the ground floor.

"The project tries to play on the notions of privacy and transparency, fluidity and functional considerations," said Kettani.

"It uses a palette of materials both raw and rich in textures and colours, which in combination with the vegetal element offers an abstract composition on the street."

A slatted wooden screen separating the lounge from the stairwell retains a visual connection between these spaces. The stairs ascend to an upper floor containing four bedrooms, including the master suite. 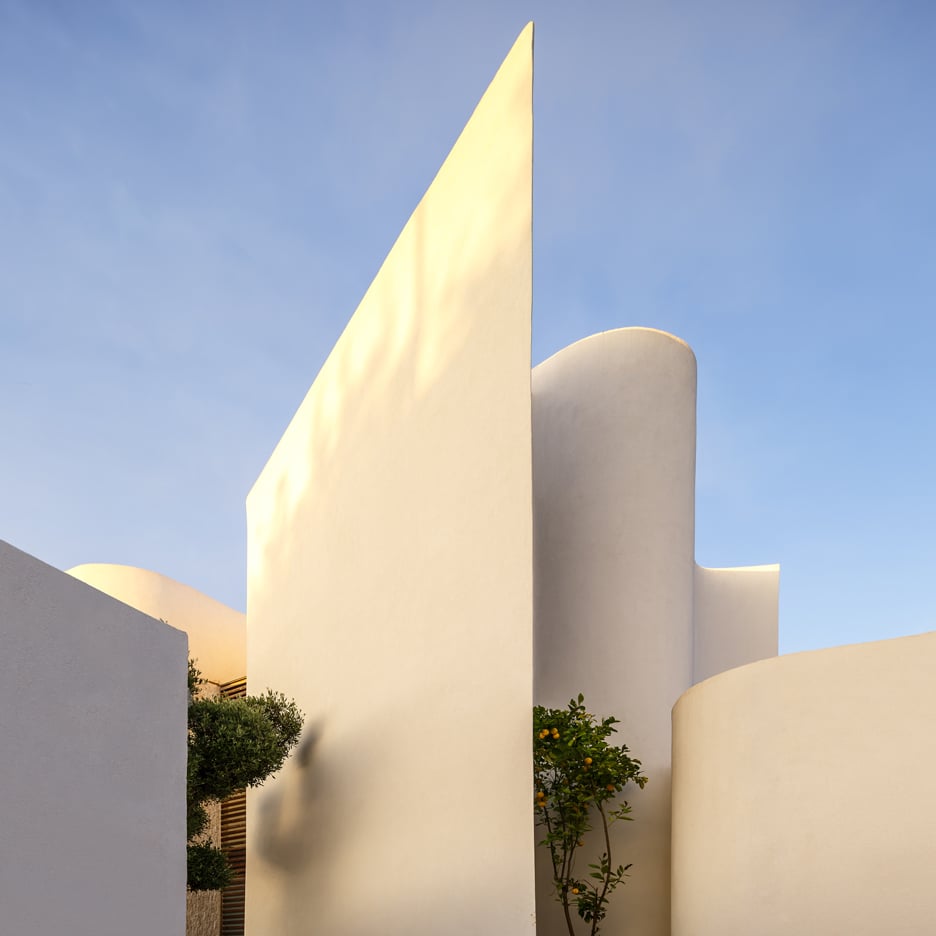 Kettani has previously collaborated with other local architects on projects including a university building consisting of geometric volumes covered with sand-hued render, and a school of technology featuring projecting windows and narrow openings that interrupt its monolithic facades.