Alain Carle Architecte has completed a home in rural Quebec made up of a cluster of blackened-wood volumes that step down the sloping site.

The MG2 residence is a three-bedroom home that encompasses 830 square metres. Rather than combining various programme elements into a single volume, Montreal-based firm Alain Carle Architecte opted to separate them, focusing on each area's specific requirements.

"This architectural composition arises from the special topography of the site, rather than from a formal preconception," the firm said.

"The site's gentle slope favoured 'tiered' development, offering a constant influx of light to all spaces."

The scheme is comprised of four wings, each of which is accessible via a central foyer, through which visitors enter the home.

The southern pavilion is envisioned as a purely public space.

The large open-plan room contains cooking and dining amenities, and is designed as a versatile space for welcoming guests.

Two sides of this room have direct access to a terrace that looks out onto the landscape.

Two distinct volumes located towards the northern and eastern sides of the property contain the home's bedrooms. 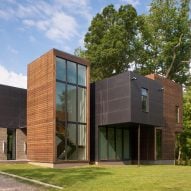 One of them is reserved for the master suite, and includes its own ensuite and walk-in closet. The other contains two guest bedrooms, as well as the home's two-car garage.

Several amenities for "bodily relaxation" were included in these two pavilions. "Dry and wet saunas and big showers punctuate the spaces of these volumes and give the premises a 'lived-in' look and feel," said the architects.

On the outside, a small cold-water pond allows the residents to cool off after a sauna or steam bath.

The last pavilion occupies the southwest corner of the home, and is dedicated to work spaces.

"This volume is positioned apart from the rest of the building to play the role of 'guest wing' for visitors who sometimes come for business," the architects said.

The residence also has partial lower level. Here, the architects included a large exercise room, as well as a workshop and other utility rooms.

Rustic materials were used throughout the property, such as weathered wooden beams and locally quarried stone floors.

"The interior and exterior wall claddings come from an abandoned sawmill, and the paving stones were recovered from an old quarry," said the architects.

Rather than trying to impose an aesthetic on the occupants, the architects focused on designing spaces that could be populated by the resident's own belongings.

Other homes in the province of Quebec include a cabin by a lake, whose all-black exterior contrasts its white interior and a countryside dwelling by studio MU Architecture that consists of rectilinear volumes clad in stone and cedar.