French office Dominique Coulon & Associés has completed a media library in Thionville, France, featuring a wavy facade that lifts up to reveal ribbons of glazing facing into curving courtyards.

The Media-Third-Place Library provides the Thionville commune in north-eastern France with a media library, as well as music studios, a broadcasting media room, an auditorium and a cafe.

The building is located on a street corner with a colonnade of tall trees lining three of its sides.

Undulations in facade dip inwards to create three curved courtyards. A wave of glazing running around the base of the white walls scoops upwards to permit views out into the courtyards but dips down in areas that face the street to offer privacy.

"The facade serves as an unfurling ribbon that serves as a backdrop to the different universes contained in the programme," said the architects. "At its closest to the street, the ribbon dips, the better to contain it, rising again where it stands further back."

"The hollow and solid sections produce an ambiguity between inside and outside, questioning the borders of the public space," they added.

Another opening is hollowed out of the centre of the building and features a meandering garden ramp that leads up to a green rooftop.

Mounds of grass offer spaces for people to take a nap, picnic or read outside with views of the surrounding treetops.

Inside the building is predominantly open-plan, with the literature library occupying the centre. An area for small children, the multimedia library, and permanent and temporary display areas are placed in curved pockets.

Bulbous shapes cover the walls of the black music room to improve the accoustics, while green carpeting and benches are used in the social reading areas like the outdoor spaces on the exterior.

Rather than using walls, the architects have inserted a series nine rounded pods to host the more specific elements of the programme.

These volumes, described as "bubbles", host a range of functions like language laboratories, places for playing video games and an arts room.

"The bubbles are defined as cocoons where people are cut off from the other universes, escaping from the collective area," said the architects. "The bubbles are the last refuge, the most intimate part of the building."

Openings are carved out of the walls create private reading nooks in the exterior and interior, while one features a tunnel that lead emerges in the children's play area.

A further volume, which is completely pink inside, is a story-telling area for children, while another furnished with cork stools is an intimate reading space.

Dominique Coulon & Associés has designed another multimedia library in Anzin, as well as a music school splattered with Jackson Pollock-inspired paintwork, a Paris swimming pool and a group of schools with orange detailing. 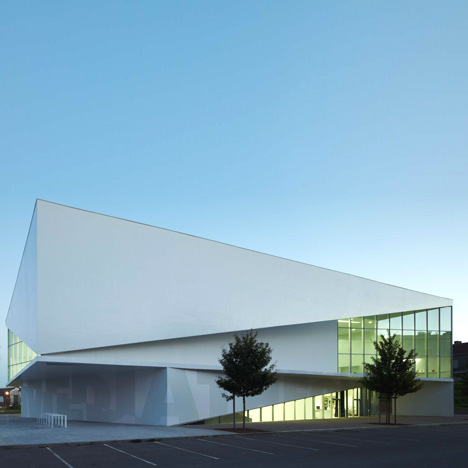 Photography is by Eugeni Pons and David Romero-Uzeda.