Paint was thrown at the walls of this concrete music, drama and dance school in eastern France by Dominique Coulon & Associés, creating a veined pattern based on the paintings of abstract artist Jackson Pollock (+ slideshow).

The Strasbourg firm headed up by architect Dominique Coulon designed the Henri Dutilleux Conservatoire of Music, Dance and Dramatic Arts for a plot on the edge of the city of Belfort – creating a boundary between the built-up area and a wood.

The school is described by the architects as an "almost opaque mass of grey concrete", which is made up from a series of volumes that are decorated with deep blue veins of paint.

The paintwork was carried out by artists Max Coulon and Gabriel Khokha, who practiced their technique on buildings awaiting demolition and created their own paintbrushes to achieve the particular finish. The pair worked together from a mobile cradle to throw paint at the walls of the building.

Their technique is based on the action paintings of American abstract expressionist Jackson Pollock, who created works by pouring and dripping paint on canvas. 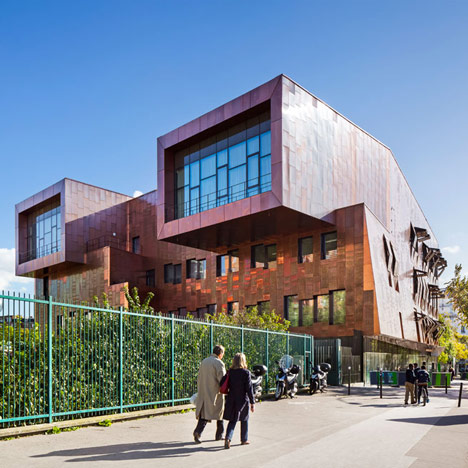 "The drip painting was inspired by the work of Jackson Pollock," Coulon told Dezeen. "What we wanted to achieve for the conservatoire was a skin or a texture reminiscent of the lines in plants and marbling on stone."

"The process used two shades of blue; when these are added to the grey of the concrete, an effect of depth is produced," he added. "Light catches on the splashes of paint; the facade takes on an iridescent appearance and comes alive."

The dark-on-light theme is reversed in an internal courtyard, where dark walls are splattered with light-coloured paint.

"The central patio is the darkest area," said the studio. "Its colour and its negative drip design reverse the codes of the outer envelope. It is the ultimate expression of density."

The building is formed of a series of concrete volumes that define different areas of the school for rehearsing and performing.

Its glass wall faces towards a statue of a lion carved by Statue of Liberty sculptor Frédéric Bartholdi, which was constructed in 1879 as a symbol of resistance to the enemy.

Strips of glazing on the lower floor and rows of smaller windows with angled frames offer views out towards the city.

Inside, a large entrance hall with raw concrete walls leads to a collection of classrooms, studios and rehearsal rooms. Each of the practice rooms has acoustics tailored to one specific instrument.

Other projects by Dominique Coulon & Associés include a Paris swimming pool and a group of schools with orange details.