Dezeen is giving away five copies of a guide to mid-century chairs, featuring designs by Hans J Wegner, Charles and Ray Eames and Frank Gehry.

Published by Pavilion Books, 100 Midcentury Chairs: And Their Stories celebrates a variety of chair designs created between 1930 and 1970, detailing their materiality, as well as the craftsmanship and manufacturing process behind them.

Author Lucy Ryder Richardson, co-owner of mid-century modern brand Modern Shows, has interviewed the children and relatives of the designers to create unique insights into the design of each chair.

"A mid-century chair is not simply something to sit on, it is a piece of design at once functional and aesthetically pleasing, which holds in its construction an elaborate story, rich in the drama, gossip and intrigue that accompanied the pioneering furniture designers of the Modern era," said the publishers.

Among the featured furniture is the Frank Gehry-designed Wiggle chair. Designed in 1972, the chair is made from sixty layers of bonded cardboard.

Hans J Wegner's CH24 chair, known as the Y Chair because of its characteristically shaped back, is also included.

It is one of over 500 chairs designed by the legendary Danish designer for furniture company Carl Hansen & Søn, and has been in continuous production since 1950. The process involves over 100 different steps, including the hand-weaving of the seat from more than 120 metres of paper cord. 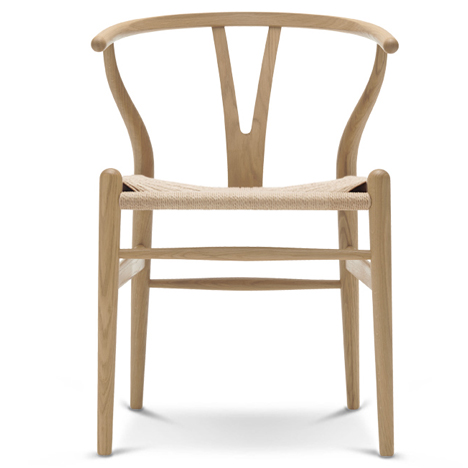 The book also profiles Wegner's Papa Bear Armchair, British furniture designer Robin Day's 1951 beech and plywood Hillestak Chair, as well as the Poeten sofa that Danish designer Finn Juhl made for his own home in 1941.

100 Midcentury Chairs: And Their Stories follows the continuing interest in mid-century furniture, which has shown no signs of slowing down. Last year saw a boom in reissues of mid-century designs, while more recently designs from the era have gone into production for the first time.

Examples include a collection of "timeless" chairs by Polish sculptor, and the Triiio table collection by Danish architect Hans Bølling.

The book can also be also be purchased online for £16.99.