Israeli designer Bar Gantz has created a collection of furniture by steam-bending wood into twisted shapes.

The collection – which was included in Dezeen's list of 12 of the best products by up-and-coming designers at IMM Cologne 2017 – includes a table, trestle, shelf and mirror.

The bending process for each piece involves heating thin pieces of wood in a steam box, which makes them pliable enough to be moulded into curves.

After spending months researching the technique, Gantz became particularly fascinated with using it to create twists.

She began experimenting with ways of incorporating these shapes into furniture, using them in place of traditional supports.

"When I was first introduced to this technology, I immediately saw the potential, as well as the magic," said the designer, who completed the series as part of her final project at the Holon Institute of Technology.

"I fell in love with the idea of bringing back to life an old, traditional and ecological expertise," she said.

The coffee table has a circular tabletop supported by three strips of wood, which are bent into upside-down U-shapes.

Each of the legs is slightly twisted, and they are joined together at the top to provide additional support.

The trestle is also made from a pair of bent strips that run alongside each other, but split to form legs. Each of the legs is held in position with additional U-shaped strips of wood.

For the mirror, Gantz used a single piece of wood that twists around to form a support, while the shelf curves in the centre to form a flat surface for displaying objects.

Other new products on display at the fair this year included tinted glass shelving by Werner Aisslinger that can be customised online, and furniture made using a traditional Colombian weaving technique. 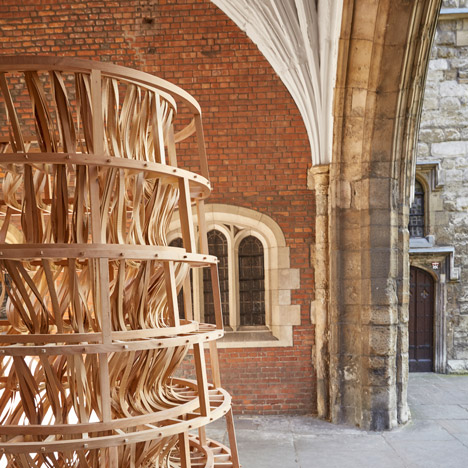