The cabins are located on a historic farm, called High Meadow, that sits adjacent to the Fallingwater residence in Mill Run, Pennsylvania. The farm serves as the home base for the Fallingwater Institute's summer residency programs in architecture, art and design.

The shelters – which enable the institute to accommodate more students – are an extension to a cabin dating to the 1960s. Until now, sleeping accommodation had been limited to the four-bedroom cabin.

"After exploring a variety of design options over several years, a decision was made to enlarge the footprint of the existing house, doubling the property's capacity with four new dwellings," explained Bohlin Cywinski Jackson, a Pennsylvania architecture firm established in 1965. The studio is well-known for its Apple store designs in New York City.

The new wooden abodes are raised off the ground by a network of steel columns, which result in minimal disturbance to the land.

For each dwelling, the team extended a side wall beyond the glazed facade, helping create privacy and shade. The wall is affixed to a deep, angular roof eave.

Each cabin contains two twin beds, a desk, a closet and a full bathroom. Large windows provide framed views of the surrounding terrain.

"Materials and finishes are deliberately minimalistic and durable, lending a sparse elegance to the space," the team said.

The new shelters are adjoined to the original cabin via a large, screened porch that functions as a dining and social area. A walkway lined with a wooden screen further connects the old and the new.

"A horizontal screen, made of Norway spruce harvested and milled on site, extends from the main cabin and continues along the walkway leading to the dwellings,” said Bill James, a project architect in the firm’s Pittsburgh office.

The client was the Western Pennsylvania Conservancy, a nonprofit organisation that maintains and operates the Fallingwater site and its summer residency programs. The home, regarded as one of Wright's greatest masterpieces, consists of concrete planes that cantilever over a waterfall.

The Pennsylvania chapter of the American Institute of Architects awarded the High Meadow cabin project a Silver Medal – its highest honour. "The scale and materiality of the building is in great contrast to the beautiful background," the jury noted. "The graceful addition to the existing structure successfully provides new public and private amenities."

This is not the first time Bohlin Cywinski Jackson has worked at the Fallingwater site. In 2006, it completed the adaptive reuse of a barn dating to 1870. The historic structure was converted into a space for exhibitions, lectures, classes and other events.

The firm has three offices in Pennsylvania – in Wilkes-Barre, Pittsburgh and Philadelphia – along with locations in Seattle and San Francisco. Other recent projects by the studio include a nature centre in Pittsburgh that is designed to blend with its woodland setting and an Apple store inside the Santiago Calatrava-designed World Trade Center Transportation Hub in New York. 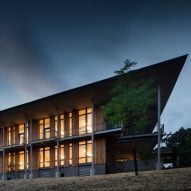