Claesson Koivisto Rune's collection encompasses five pieces – a sofa named Alicia, the Anita chairs, a series of occasional tables, a headboard and a set of cabinets.

It launched during this year's Stockholm Design Week at the Nobis hotel in the city centre, which features interiors designed by the Swedish architects.

To coincide with the collection's release, the Swedish architects enlisted the help of Fernando Guerra – who they felt could "capture the collection in relation to architecture of a certain grandeur".

"I have followed Fernando Guerra's work for some years now and been fascinated by his way to capture scale, mass and light in architecture," the firm's co-founder Ola Rune told Dezeen.

"The idea was to capture our collection in relation to architecture of a certain grandeur," he continued. "Scale and proportion are some things we always think of when designing furniture."

With their collection, Mårten Claesson, Eero Koivisto and Rune wanted to look back on some of the brand's most iconic designs – namely those by Swedish furniture designer Bruno Mathsson.

"In many ways Dux is still recognised for Bruno Mathsson's ­legendary designs of the 70s and 80s and the ­successful Bra Bohag – Good Household Goods – concept," said the trio.

"Like with Bruno Mathsson, the strict and the curvaceous live together, as do form and function – a functionality that is not just ­ergonomy but also furnishability."

The Alicia sofa, which Guerra captured against a contrasting concrete background, is a modular system that allows different configurations and sizes.

It includes integrated hard tabletops and bow-shaped backrests that the designers say "give rhythm to an otherwise strict design".

The rotund Anita chair is described by the designers as a combination between a classic Scandinavian Windsor chair and an upholstered Italian easy chair.

A series of colouful occasional tables are inspired by the forms and shapes seen in the works of American artist Ellsworth Kelly, as are the Sun and the Moon cabinets.

An upholstered headboard named Eden completes the collection and is designed to fit Dux's existing range of beds. 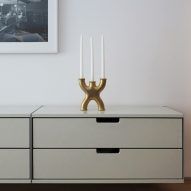 The range is the second launch by Claesson Koivisto Rune during Stockholm Design Week. The practice also expanded its Smaller Objects collection, which first launched in 2014 to offer designers an alternative to the traditional royalty model.