Architecture studio Claesson Koivisto Rune has created a prototype for an administrative town hall in Ukraine, which had been set for rollout across the country prior to the Russian invasion.

Named the Administrative Service Centre, the building was built in the town of Novi Sanzhary to offer citizens better access to administrative government services.

However, in light of the war, it is not currently in use. Its current condition is also unknown, according to the Swedish studio Claesson Koivisto Rune.

The Administrative Service Centre prototype was created in 2021 with U-LEAD, a programme initiated by the European Union with Ukraine to support decentralisation in the country.

The model was planned for roughly 400 sites in Ukraine where improved access to government services is needed. The goal was to counteract corruption and offer "citizens the freedoms that [people] in Sweden and the EU enjoy", Claesson Koivisto Rune said.

"In 2017 we were approached and contracted by SKL International with a scope to design a building to house the office for local civil servants and citizens to meet," the studio's co-founder Mårten Claesson told Dezeen.

"As a free-to-use blueprint in any of a calculated 400 villages that were lacking such an office building, we felt strongly for the cause and accepted a nominal fee for our pre-study," Claesson continued. "After that, we decided to offer the remainder of our services pro-bono."

While the progress of the project has been forced to a halt in light of the Russian invasion, Claesson Koivisto Rune hopes the project may still be rolled out across the country one day.

By publishing the project now, the studio wants to draw attention to the role of architecture in supporting democracy and the recovery of Ukraine.

"Ukraine was a young democracy before the war and the need to assist in cementing democracy and to prevent corruption will remain," said Claesson.

"It is our hope that once peace is achieved, it will be possible to continue with this and many other initiatives that Ukraine, together with its Swedish and EU partners," Claesson continued.

"If nothing else right now, our design of a building to support the democracy in Ukraine, inaugurated in 2021, can serve as a small reminder of this hope that a brighter future can be built." 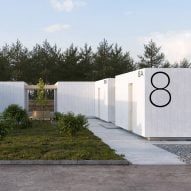 It was intended to be rational and economical to build, ensuring it could be constructed anywhere in the country.

"We designed the building so that it would work anywhere because we could not know its exact location," Claesson explained.

"The round corners came out of that, although a rectangular building in principle, it can be placed in any direction without interfering relative to the existing town fabric."

Visually, the goal for the Administrative Service Centre was intended to have a "solid authoritarian stance" while also being transparent and non-imposing.

To achieve this, it features a distinctive and steep roof that references local vernacular, alongside grey brick walls and roofing that offer a solid yet sculptural look.

The only brick walls are at its four corners, which house toilets and storage. The rest of the building is lined with large windows to ensure full visibility and transparency.

"We urge anyone to study the plan of the house carefully because there is more in it than may initially meet the eye," concluded Claesson.

"It is not a glass box but 'transparent' for real. It really does work to promote a humble meeting point between representatives and citizens."

Russia's ongoing attack on Ukraine began in the early hours of 24 February. A number of individuals and organisations across Europe have since launched initiatives to support and raise money for Ukrainians who are before forced to flee their homes to safety.

This includes institutions and studios launching initiatives to pair Ukrainian architects and architectural students who are fleeing with offers of work.

Elsewhere, design studio Formafantasma and architectural photographer Edmund Sumner are among those selling their work to raise funds for those affected by the war.